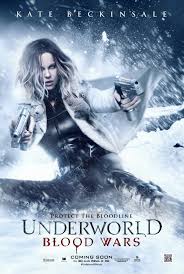 Plotless is a criticism one often sees leveled against action films. That's one failing  UNDERWORLD: BLOOD WARS certainly does not suffer from. On the contrary, there is so much plot that the film becomes a huge, incomprehensible mess. Not only do we have four previous films worth of backstory to recount in flashbacks and voice-overs, but there are multiple factions of vampires and werewolves each working to their own ends as they cross and double-cross each other. And sure, you can follow it if you pay close attention, but given how dumb and ridiculous it all is, the rewards don’t really justify the effort.

Dumb and ridiculous has always been a trademark of the UNDERWORLD series in which blood sucking “death dealer” Selene (Kate Beckinsale) has to do battle with the savage Lycans (the series name for werewolves) while simultaneously fending off scheming members her own kind. That was fine in the previous films, though, as it never felt like they took themselves all that seriously. As disposable as they may have been, they were entertaining on a B movie level, always offering plenty of well-staged action scenes and cheesy special effects. Here, the action and CGI monsters seem like more of an afterthought, with Cory Goodman’s script instead focusing on the dense mythology of the series.

The UNDERWORLD films can generally be counted on for giving various classy British actors a chance to pick up a paycheck when ‘Downton Abbey’ and ‘Game of Thrones’ are on hiatus and they missed out on getting a part in the latest British WWII drama or Margaret Thatcher biopic. BLOOD WARS is no exception, and what pleasures the film does have are thanks to solid supporting performances by ‘Game of Thrones’ alum Charles Dance and James Faulkner as a couple of vampire elders whose delivery almost makes all that exposition they have to deliver palatable, and ‘Davinci’s Demons’ star (and ‘Sherlock’s Irene Adler) Lara Pulver as one of the film’s main villains. Unfortunately, Beckinsale seems like she’s getting bored with her character (or maybe that’s just me), and Theo James as David lacks the necessary charisma to carry the weight of being her male co-lead.

Director Anna Foerster has worked as cinematographer on a number of Roland Emmerich films. She's a technically solid filmmaker and has the black/blue/purple color palette of the series down, but her direction doesn't bring anything noteworthy to the film.

Look, this is a 90 minute movie about vampires and werewolves shooting and sword fighting. No one should expect anything too deep or substantive, but it should be fun. Instead, BLOOD WARS is kind of a slog. Fans of the series will no doubt still watch it just because they’re already invested in the franchise, but despite an ending which leaves the door open for yet another installment (of course), I doubt too many people will be clamoring for it. 2 out of 4 stars.
Posted by Bob Ignizio at 12:57 PM