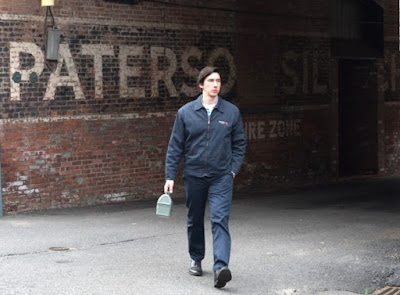 We bid farewell now to 2017, that most terrible, awful, Trump-cursed year. Good riddance, bad year! As always, the movie theater proved a good escape from the frenzied chaos, and the year brought us some excellent films, and not too many terrible ones.

My list of favorites includes two titles starting with "I," the first-person pronoun, and not one of this year's four movies with the word “Wonder” in the title. I did, however, like cinematography and Kate Winslet's performance in Woody Allen's Wonder Wheel. I didn't see everything this year, God knows, and have not seen some scheduled to be released soon, like The Post, All the Money in the World, Molly's Game and Phantom Thread.

The top movie on my list, Martin McDonagh's Three Billboards Outside Ebbing, Missouri, is currently playing in theaters, and is getting the nominations and recognition it deserves. McDonagh, the Irish playwright whose infrequent movies have included the coruscating In Bruges and Seven Psychopaths, has had a popular breakthrough with Three Billboards, in which Frances McDormand plays a woman determined to get justice for her murdered daughter.


McDormand has said she played the role of Mildred Haynes, the movie's profane, coverall-wearing heroine, as if she were a man — John Wayne in particular. As in all McDonagh's films, there's a lot of violence, but in the service of a morally complex story. Mildred isn't entirely blameless, and Sheriff Willoughby (Woody Harrelson), whom she challenges to catch her daughter's killer, is not a villain; he's also tormented by the unsolved crime. Even the dumb, racist, comic-book-reading cop Wilson (the always great Sam Rockwell) has a moral awakening.

I, Tonya doesn't open in Cleveland until January 5, but the mock-doc documentary about the infamous 1994 Tonya Harding case is worth waiting for. The dynamic black comedy, throbbing with '80s radio rock hits, stars Margot Robbie as the championship figure skater who was implicated in a violent attack on her Olympic rival, Nancy Kerrigan. Alison Janney, as Tonya's cold, cruel mom, LaVona, is certain to get all the nominations.

Jordan Peele's chilling Get Out, weirdly nominated in the Comedy category of the Golden Globes, turned a “Guess Who's Coming to Dinner” story into a chilling horror-movie exploration of slavery and murderous racial envy, under a veneer of polite liberal sophistication.
Ken Loach's I, Daniel Blake (actually a 2016 UK release that found its way to our burg in mid-2017), told the heartbreaking story of a 59-year-old carpenter in Newcastle, England, fighting for his unemployment benefits after having a major heart attack. He befriends a desperate single mom, and they help each other weather the cruelties of late capitalism. As I wrote in my review, the film is “no mere socialist polemic. It is also a masterful piece of filmmaking, exquisitely photographed in muted colors by Robbie Ryan The direction is stunning in its simplicity, directness and restraint. Influenced by the neorealist style of De Sica's Bicycle Thieves, Loach's films have a documentary verisimilitude (he has also directed many documentaries and docudramas). Dave Johns, a Britsh standup comedian, writer and actor, is a marvelous Daniel Blake, pugnacious, honest and authentic. Hayley Squires is exceptional as the hungry, tormented Katie.”

Brad's Status didn't appear on many people's radar, but I enjoyed Mike White's meditation on the meaning of success. Middle-aged Brad (Ben Stiller, perfectly cast) wrestles with his feelings of envy and regret as he takes his gifted musician son on a tour of elite colleges. Brad feels like a failure compared to his much richer and more successful classmates, and is even a bit jealous of his son, who's been accepted to Harvard. White, a remarkably sensitive writer, said he wrote the film in part as homage to his beloved dad. It shows empathy for all its characters, a quality seen in White's HBO series Enlightened and films like The Good Girl and Beatriz at Dinner.

Because I like philosophical movies, I was quite taken with Paterson, Jim Jarmusch's meditative film about a bus driver (Adam Driver) and part-time poet influenced by the physician-poet William Carlos Williams, in Williams' hometown of Paterson, New Jersey. The movie chronicles the quiet, quotidian life of the bus driver, also named Paterson, with his sweet, artistic wife (Golshifteh Farahani) and the various people he encounters on his daily bus route and at the corner bar.
“Not a lot happens in Paterson, and that's exactly the point," I wrote in my review. "The unfolding of the rhyming days, the 'inarticulate poems' of the bus passengers, bar regulars and other plain people. Oh, there are incidents — a lovesick man threatens violence at the bar, Paterson's bus breaks down — but the movie really is about the texture of everyday life, the ordinary inspiration for extraordinary creativity, and poetic synchronicities. Laura shares a dream she had about twins, and the next day Paterson sees twins everywhere. The little girl poet shares a poem about a waterfall, Laura hangs up a picture of a waterfall, and Paterson meets a Japanese poet beside the Passaic Falls. Every thing has meaning, just as Williams wrote famously:


so much depends
upon
a red wheel
barrow
glazed with rain
water
beside the white
chickens.”

Another small, meditative film was Lucky, starring the 90-year-old Harry Dean Stanton, who left us this year at age 91. Written and directed by well-known character actor John Carroll Lynch, the film follows the daily life of Lucky, a gruff loner in the desert town of Piro, California. His routine consists of coffee, yoga exercises, TV game shows, crossword puzzles, glasses of milk, and visits to the diner and Elaine's, the local tavern. And, of course, smoking, lots of it. (The always gaunt Stanton once said he only ate in order to smoke.) Lucky is well known among the locals, and we hear some of their stories in monologues that suggest a stage play like The Time of Your Life or The Iceman Cometh. Quiet and thoughtful, it's a fine elegy to Stanton, incorporating details of his own life and weaving them into a poetic story. Here's a link to my review.


A sentimental favorite, Wait for Your Laugh, told the story of one of my favorite entertainers, Rose Marie, best known as the comedy writer Sally Rogers on The Dick Van Dyke Show. Jason and Christina Wise, the film's director and writer, respectively, created a loving and surprising chronicle of the nine-decade life and career of Rose Marie Mazetta, a child singing star known as Baby Rose Marie, the little girl with the grown-up voice, who was belting out jazz numbers at age 5 and had her own radio show in the '20s.

The documentary offers some revelations: Rose Marie was helped and protected by mobsters like Al Capone ("Uncle Al") and, during her years performing in Vegas, Bugsy Siegel; she expected more screen time on  Dick Van Dyke, but had to take a back seat to rising star Mary Tyler Moore; her film career was derailed when she told off a Hollywood producer who sexually harassed her ("You couldn't get it up if the flag went by!"). We also learn why she always wears a black bow in her hair. The filmmakers interview Miss Marie extensively, along with her daughter, as well as contemporaries like Carl Reiner, Dick Van Dyke and close friend Peter Marshall, host of one of her longtime TV homes, The Hollywood Squares. The Wises made good use of Rose Marie's wonderful color home movies to tell the sweet and sad story of her marriage to trumpeter Bobby Guy, who died young of a blood infection. As a big fan of Rose Marie, now 94 and thrilled by the renewed attention, I was happy to see this film and hope it gets a wider release.

Runners-up: Maudie, I Am Not Your Negro, Whose Streets?, Their Finest, The Big Sick, Menashe, Darkest Hour, Beatriz at Dinner, Tiffany Haddish's hilarious performance in Girls' Trip.

Stuff other people loved that I didn't: Lady Bird, The Florida Project.
Posted by Pamela Zoslov at 1:05 PM