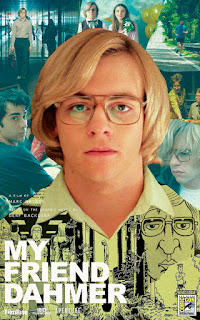 It’s funny how a movie adaptation of a book can be faithful in very many ways, and yet still wind up missing the heart and soul of its source material. Such is the case with MY FRIEND DAHMER, adapted from the graphic novel by Clevelander John “Derf” Backderf. It’s an autobiographical tale in which Derf (played in the film by Alex Wolff) recounts his high school semi-friendship with Jeff Dahmer (Ross Lynch), who would go on to become one of the most infamous serial killers in American history.

At the time, Dahmer just seemed like a harmless weirdo whose bizarre antics provided Derf and his friends with a source of amusement. They made Dahmer a mascot of sorts, encouraging his odd disruptive behavior. Eventually, though, the fun came to an end as Jeff's dark side became more apparent. This was most obvious in his level of alcohol consumption, which even in the party hearty era of the seventies seemed excessive, and clearly not done for fun.

There’s also considerable focus on Jeff’s home life, where the constant fighting of his parents and the pressure by his dad to be more “normal” only served to drive the budding killer further into dark pursuits. Making use of chemicals his dad brought home from work, Jeff would retreat to his backyard clubhouse and dissolve animal carcasses in acid just to see what was inside.

All of this is in both book and film, but there is a difference in emphasis and tone. Writer/director Marc Myers spends more time on Dahmer’s home life than Derf did, perhaps in an effort to put forth some sort of explanation for why his subject became the monster he did. Derf wasn’t particularly interested in that aspect of the story, because he rightly understood that it’s difficult, if not outright impossible, to pinpoint what causes anyone to become a serial killer, if there even is a “reason” for such behavior.

Derf’s book focused more on the ways society failed Dahmer. Failed to notice the obvious signs that something was wrong, and failed to get him help before he was too far gone. We see a little of that in the film, mainly with regards to Derf and his friends' complicity, and how his parents troubles blinded them to what was going on with their son. But there's little emphasis on how teachers and authority figures at the school turned a blind eye to Dahmer's concerning behaviors, and overall it feels as if Myers isn't as interested in this aspect of the story.

A lot of the problems I have with the film probably come from the decision to omit the narration by Derf. It’s understandable, as films that rely too much on narration rather than telling their stories with what’s on the screen have their own set of issues. But Myers never finds a way to convey the observations made in that narration in a more cinematic fashion. This results in Derf and his friends, who were at the center of the book, becoming peripheral figures. It also makes some themes and plot points being left vague, while at the same time others are handled in a more obvious and ham-fisted manner.

On its own terms, MY FRIEND DAHMER is still a good film. The performances and the attention to period detail in particular are noteworthy. But the source material it comes from isn’t just good; it’s great. Myers made a noble effort, but for this viewer at least, he fell short. 2 ½ out of 4 stars.
Posted by Bob Ignizio at 10:56 AM