The Survivalist (now on video) 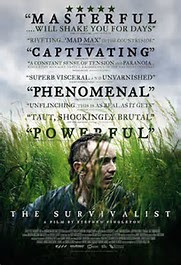 The SHOUT! Factory video release of Stephen Fingleton’s grim, minimalist dystopian drama-thriller is an item which actually works best in the DVD/Blu-ray format - not downloads, not on a big screen, not even on good old VHS. The menu presence of a handful of related Fingleton-scripted short subjects, clearly set in the same doomsday vein as the feature (one is, in fact, the prequel), makes the whole experience complete. That it's a complete feelbad mini-spectacle, well. that's for your individual tastes.

Some viewers may note a resemblance to Hollywood's film adaptation of Cormac McCarthy's The Road, with its small cast's ground-zero-eye-view of the post-apocalypse. Only an opening graphic gives the backstory, that oil and electricity have run out for mankind, cueing a massive population die-off.

Now only remnants of humanity fight it out, these particular ones in some green part of the UK (the film was Northern Ireland production, and the milieu certainly does have a tragic aura).

A nameless young man (Martin McCann) - though we know from the bundled short-subject prequel he was named Finn - subsists in the forest with his small farm, mainly growing his own food and sometimes setting futile traps. He is besieged by occasional marauders, whom he summarily kills, despite being desperately low on shotgun shells.

One day an aged, hard-bitten mother (Olwen Fouere) and her nubile daughter (Mia Goth) show up, desperate. After much tense standoffs at gunpoint, they barter their way into a cohabiting arrangement with the survivalist. Naturally, he is the boss and takes the girl for sex. While ever-present danger has the trio working together to save each other's lives, there is only enough nourishment - or trust - to go around, and the seemingly defenseless women are also capable of lethal plotting against the man. The downbeat ending gives hints of a larger conspiracy in the background, but details are left to one's imagination. Rather satisfactorily, for me anyhow.

Fingleton renders the tight material (he might have studied Polanski's KNIFE IN THE WATER) in long, moody shots, with minimal dialogue, powerful acting, foreboding silences and nature sounds to delineate a tense, fatalistic narrative, with a palpable sense of diminishing resources and approaching extinction. I suggest one disregard the promo art and copy that attempts to hitch the material to the MAD MAX caravan; it's not that type of actioner at all.

The shorts, evidently done with the same crew at the same time - and with the same dour frame of mind - include an urban bit with apartment-bound people fighting over no-longer-manufactured insulin for their diabetics, and a seeming dry-run for THE SURVIVALIST, with two females outwitting a scrounging murderer. In a making-of featurette Fingleton states that a documentary called COLLAPSE, about the world running dry of fossil fuels with no fallback plan, served as his muse for the whole gloomy enterprise. Well, okay. It's a key to how effective THE SURVIVALIST is, that you wonder if not making these films might have stretched out our food and water and electricity to allow us to hold on maybe a day or two longer. But imagine how much of our resources might have been saved by not doing all those $200 million sucky comic-book sequels? (3 1/4 out of 4 stars)