The Chagrin Documentary Film Festival Tells It Like It Is, Oct. 3-8 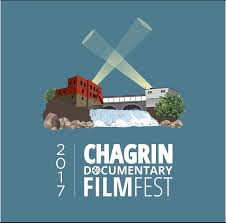 The overused label (especially in movie hype) “labor of love” really applies to the The Chagrin Documentary Film Festival. The CDFF premiered eight years ago, as organizer Mary Ann Quinn Ponce’s way to honor her son, filmmaker and Chagrin Falls native David Ponce who died at 20 of leukemia in 2006 during post-production of one of his nonfiction films.

Now the CDFF is a widely anticipated event that unreels in the fall
throughout the village of Chagrin Falls when the place is in full autumn foliage. Screening sites - most of which are all within nice walking distances from one another - range from the Chagrin Valley Little Theater to the old Township Hall on Main Street to the United Methodist Church.

How big is the festival? Serious names in the film industry arriving this year include Colin Hanks, actor-filmmaker son of Great Lakes Shakespeare Festival alumnus Tom Hanks. Two features directed by Hanks the younger will screen, both music-oriented. ALL THINGS MUST PASS is an oral history of the roller-coaster rise and fall of Tower Records, a music-vending chain that helped shape the pop scene as we know it. EAGLES OF DEATH METAL (NOS AMIS) profiles the American hardcore-sound band caught in a notorious Islamic terror attack at a French concert in 2015 and their return to France a year later.

Oscar-winning documentary director Thomas Lennon (no relation to the actor and co-creator of Reno! 911) also has two features, one with a Cleveland-area tie: KNIFE SKILLS, about the opening of a Shaker Heights French-style restaurant designed to give jobs to ex-convicts. SACRED, compiled by Lennon from 40 filmmakers around the world, is a collage of humanity’s varying religious traditions.

Another strong local product is BURN THE SHIPS, about an Akron team in the all-women National Pro Fastpitch League, vying for a softball championship in a sport that a lot of fans don’t even know exists.

Far from NE Ohio, MY HERO BROTHER follows a group of young people with Downs Syndrome and their families on a Himalayan expedition. FOR AKEEM details an at-risk teenage girl in violent St. Louis, who becomes a young mother in the course of the narrative. THE CINEMA TRAVELLERS concerns a pair of entrepreneurs in India who, using tents and ramshackle equipment, set up temporary cinemas and show popular films in the most remote and poorest villages.

In addition to features the festival showcases short subjects and – in a new category – mockumentaries. Several short sham documentaries accompany the feature BLACK CAT, a viewfinder’s-eye-view about a long unsolved Hollywood murder mystery.

Part of the programming fun of the CDFF are tie-in events, here ranging from bocce ball to a 5K run to wine tastings and dinners to a closing live choral concert.

Tickets to features and feature-length short-subject bundles are $10. Other payment plans are available, right up to the all-access festival. For full information and schedules, go online to www.chagrinfilmfest.org.

Posted by Charles Cassady Jr. at 1:58 AM