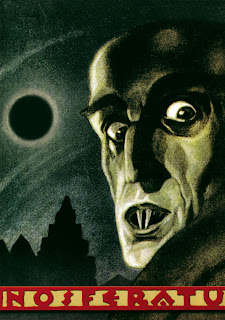 For those who don't already know, F.W. Murnau's silent horror classic NOSFERATU is in reality a very thinly disguised and very much unauthorized adaptation of Bram Stoker's 'Dracula'. Stoker's heirs were not pleased and tried to have every copy of the film destroyed, but like any good movie monster NOSFERATU managed to rise from the grave. It is now considered one of the undisputed classics of the horror genre, one of those films that film historians and critics will tell you that you simply have to see in order to have an appreciation for the development of cinematic art, blah, blah, blah. And they're right, of course, but that's not why you should watch it. You should watch NOSFERATU because, even at almost a century old, it's still fun to watch.

Is the movie scary? Not really, but it's iconic imagery will nonetheless burn itself into your brain. Seriously, how can you not love the way Count Orlok (Max Schreck) looks? This is no suave nobleman like Bela Lugosi's Dracula, or even Christopher Lee's savagely sexual take on the Count. Instead, Orlok is a cadaverous, rat-faced monster who can only just barely pass for human. And if you like your horror films with atmosphere, this one has it to spare. It also has a pretty good sense of humor, as evidenced by scenes such as the one where Orlok looks at a picture of Ellen Hutter (Greta Schröder) and remarks to her husband Thomas (Gustav von Wangenheim) on what a lovely neck she has. Like I said, fun. Perhaps a bit dated at times, particularly on the acting front (hey, I'm not gonna' lie to you just to get you to watch a classic), but certainly never dull. 4 out of 4 stars.
Posted by Bob Ignizio at 12:00 AM