Escape From New York (screens Oct.13 and Oct. 15 at the Cleveland Cinematheque)

[ESCAPE FROM NEW YORK screens Friday October 13th at 7:30 pm and Sunday October 15th at 9:50 pm at the Cleveland Cinemathque.] 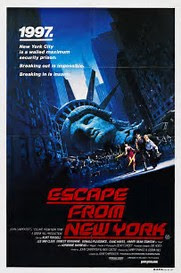 All his career John Carpenter has told folks that he’s really only wanted to make “westerns.” Yet he has consistently delivered horror and science-fiction and the occasional one-off nonconformist like a good TV biopic of Elvis Presley (featuring Kurt Russell) or the police thriller ASSAULT ON PRECINCT 13, which is regarded as a partial remake of RIO BRAVO. Okay, but not since his student-film days, if I’m not mistaken, has the dude actually delivered a genuine western.

Maybe he’s doing one of those things from The Little Prince, in which there’s a drawing of a lamb that is so perfect it’s just the box in which the lamb resides; you will never actually see a lamb, but you can still just imagine how the drawing is exactly right (sort of like my career). Same with John Carpenter and his “westerns.”

Carpenter’s 1981 flick ESCAPE FROM NEW YORK, at least, does have the DNA of a proper Hollywood-studio western, in the Howard Hawks no-funny-business filmmaking style (most recently personified by Clint Eastwood’s work behind the cameras), hitched to a high-concept dystopia plot.

When the long-promised remake, probably $240 million, comes out filled with careening digital f/x and swooping Camera Angles Not Found in Nature we will appreciate this pulpy programmer with a B-movie spirit a bit more.

Setting is the grim “future” year of 1997 (it wouldn’t turn out to be a good year for me either). Near-future America is a chilly police state, embroiled in a (offscreen) war with Russia, and crime has risen so sharply that the island of Manhattan has been given up as unsalvageable and converted into a vast open-air maximum-security prison for the worst offenders in the land.

When leftist terrorists hijack Air Force One and crash it in Manhattan, marooning the US president (Donald Pleasance) in advance of vital peace talks, government force ex-war hero Snake Plissken (Carpenter regular Kurt Russell) to single-handedly infiltrate New York to retrieve the POTUS from the walled-off, mined, and booby-trapped nightmare city and its gangs.

And trust me, internet kids and Millennials who are going like, who is this Ron Carpenter anyway?...things in NYC were so crappy around this period that the premise at least held a certain frisson. Even Saturday Night Live was lousy – and on the few occasions I tuned in I remember them distinctly taking offense at the gallows satire in this movie premise.

Even so, the production is a relentlessly sour and pessimistic actioner (at one point Plissken comes across a rape in progress and, in typical nihilistic fashion, just ignores it), and a bit predictable in the long haul. Flashes of levity comes from the exaggerated characterizations – Russell’s cynical Plissken matched up with Lee Van Cleef as a warden, Isaac Hayes as the supreme, tribalist Manhattan gang chieftain, a cheerful Ernest Borgnine as the city’s last cab driver, Donald Pleasance as a quivering toad of a US president, the late Harry Dean Stanton as a sort of pre-hacker-era rogue criminal scientist. Carpenter shot on a determinedly, sometimes visibly low budget, using a burnt-out St. Louis factory complex standing in for the blasted NYC.

Carpenter’s later, more lavish followup ESCAPE FROM LA would be more obvious in having a spoofy agenda behind its dystopia. Special local-interest note: it did not make it into the final cut of ESCAPE FROM NEW YORK, but Carpenter filmed a prologue depicting the crime that got Plissken in trouble, a botched robbery in…Cleveland…referenced frequently in the later dialogue. Maybe showing Cleveland and a wrecked New York together in the same film was considered just too hellish. (2 3/4 out of 4 stars)