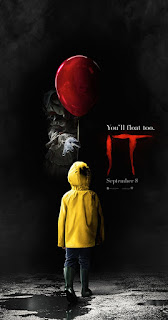 Stephen King’s 1986 novel ‘It’ is over 1000 pages, takes place in two different times, boasts a monster who appears mainly as a clown but is, in reality, comprised of orange lights from another dimension, and includes a scene in which group of adolescent friends engage in a consensual gang bang. To say that it is a difficult work to adapt faithfully to the screen is probably an understatement.

The first attempt to turn ‘It’ into a movie was the 1990 TV film version directed by Tommy Wallace. It boasted a strong cast that included Tim Reid, John Ritter, Harry Anderson, and Annette O’Toole, with Tim Curry giving an iconic performance as the monstrous Pennywise. It’s well acted and reasonably true to the book, but in trying to cram everything into three hours skips over a lot. The special effects are, to be charitable, dated, and much of the horror had to be toned down for the television standards of the time to the point that you’re not always sure whether characters have died or disappeared or been injured until it’s flat out told to you.

The idea of an R-rated theatrical remake of IT that would be split into two films, each a bit over two hours in length, was a promising one that even the usual chorus of remake haters couldn’t argue with. And based on the box office numbers so far, this new version of IT more than met audience expectations. Horror movies almost always do well their first week, but it takes good word of mouth to keep selling tickets at the rate that Andy Muschietti’s new version of the film has been raking it in. And overall, I would say that success has been deserved.

That doesn’t mean the film is without issues, though.

I’m not one for absolute fidelity to the source material when turning books into film, so many of the changes and omissions in IT didn’t bother me. However, the way this adaptation zips from one horror set piece to the next without pausing long enough to really develop any of the characters was a problem.

Even though the TV version spent only 90 minutes on the part of the story adapted here, it still managed to make the young version of “The Losers Club” kids stand out as individuals. Here, the focus is on group leader Bill Denbrough (Jaeden Lieberher) and the overweight new kid Ben Hanscom (Jeremy Ray Taylor).  Female “Loser” Beverly Marsh (Sophia Lillis) also gets a fair amount of screen time, but is more love interest and damsel in distress than the capable heroine she was in King’s novel and the TV version.

As for the rest of the Losers, they are given short shrift here. Especially galling is how Mike  Hanlon (Chosen Jacobs), the only black kid in the group, has had much of his functionality from the book stolen and given to Ben. Instead of making him the history buff who helps fill in the backstory, he becomes a reluctant slaughterhouse worker. At least he gets something to do, though. The movie doesn’t seem to know what to do with Jokester Richie Tozier (Finn Wolfhard), hypochondriac Eddie Kaspbrak (Jack Dylan Grazer), and Jewish straight arrow Stan Uris (Wyatt Oleff).

I’m actually kind of surprised in this era of internet outrage that more hasn’t been made of how the black kid  and the girl have had all had their roles and agency greatly diminished in this remake. I didn’t even think about it much until I decided to watch the TV version for comparison, and then did a quick check to see what was in the original book. Mike’s role is far more important, and without giving anything away, Bev can more than hold her own with the boys. Kind of disappointing that they have to take a back seat in this update.

Other gripes were more aesthetic, notably the CGI effects (still nowhere near as cheesy as some of the stuff in the 1986 version) and the way Pennywise (Bill Skarsgård) gets all “booga booga booga” when he attacks. Not scary, just silly, IMO.

All that said, I did mostly enjoy the film, and I think much of what ails it may be fixed if there is an extended director’s cut when it comes out on home video. And if you’re just looking for a slick horror film that offers up some genuinely scary and creepy moments (and don’t mind if the story and character development are short changed a bit), the theatrical version is probably just fine as it is. 2 ½ out of 4 stars.
Posted by Bob Ignizio at 12:46 AM