[31 Days of Halloween 2017: BEYOND THE GATES is now available on various home video formats.] 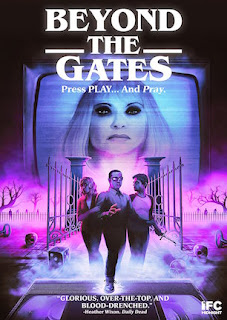 Imagine JUMANJI as a low budget eighties horror movie, and you have a fairly good idea what to expect from BEYOND THE GATES. Two estranged brothers – the successful Gordon (Graham Skipper) and ne’er do well John (Chase Williamson) – reunite after the death of their father to settle his affairs. In particular, there’s the matter of the video store dad owned and all the movies contained therein. Left behind in the store’s back room: a strange board/VHS game that sucks the brothers into a netherworld where their choices result in people dying. And once the game has begun, quitting is not an option.

Director Jackson Stewart, who co-wrote the screenplay with Stephen Scarlata, is obviously working with a low budget here, but that’s fine. He clearly knew what his limitations would be, and doesn’t try to stage anything he can’t pull off satisfactorily. Besides, capturing that eighties aesthetic doesn’t really require millions of dollars. Just plenty of fog, colored lighting, latex, and slime.

It helps that the film has a solid cast of veteran character actors and “B” players. Aside from the two leads playing the brothers, Brea Grant is likeable in a typical throwaway love interest role as Margot, Gordon’s girlfriend, and it’s nice to see horror icon Barbara Crampton as hostess of the VHS game.

The overall vibe of BEYOND THE GATES is in the ballpark of Charles Band’s output from Empire Pictures before he made the shift to direct to video cheese with Full Moon Productions. That may seem like an arbitrary distinction to the casual viewer, but fans of 80s low budget horror will get the difference. This is closer in tone and quality to something like DOLLS than it is to PUPPETMASTER. No doubt Stewart wanted to reach the level of FROM BEYOND, but doesn’t quite get there, but that’s okay. Given the resources he had to work with, one can’t really hold that against him. If you’re an 80s horror fan, it’s certainly worth rolling the dice. 2 ½ out of 4 stars.
Posted by Bob Ignizio at 12:00 AM