[31 Days of Halloween 2017: ANTIBIRTH is now available on home video and streaming.] 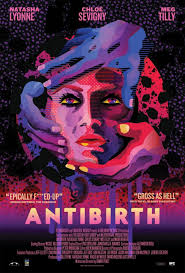 Lou (Natasha Leone) is the kind of girl whose hard partying lifestyle could plausibly lead to a situation like the one in which she finds herself in ANTIBIRTH. To be specific, she is evidently pregnant despite not having had (to her memory) sexual intercourse for the last 6 months. But hazy memories point to the possibility that something may have happened at a druggy warehouse party. Maybe she was raped by Gabriel (Mark Allen Webber), a small time drug dealer and sammer, or his buddy Warren (Maxwell McCabe-Lokos). Or maybe some other, stranger kind of violation took place.

Lou looks for support from her friend Sadie (Chloe Sevigny), Gabriel’s girlfriend. But it is Lorna (Meg Tilly), a mysterious drifter who talks about alien impregnations, who ultimately helps Lou get to the horrifying truth.

Writer/director Danny Perez draws from both Cronenbergian body horror and the psychedelic dayglo cult film aesthetic of auteurs like Greg Araki. The main theme he taps into is the fear of some pregnant women that the life they are carrying within themselves is some sort of malignant “other”.

That said, the film never gets too deep or philosophical. Instead, it revels in B-movie tropes, culminating in a schlocky but fun over the top finale. Is it art? I don’t know. But it is good trashy fun. 3 out of 4 stars.
Posted by Bob Ignizio at 12:00 AM