The patriotic alternative to NFL Football is Cinema Wasteland in Strongsville, Sept.29-Oct.1 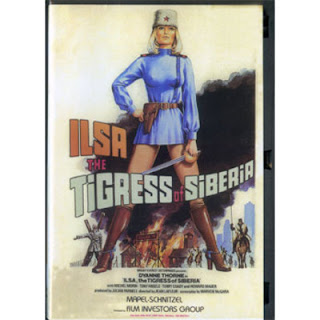 I suppose you are all wondering where the Cleveland Movie Blog stands in the NFL athletes-taking-the-knee-against-the-National-Anthem controversy. Well, I am proud to announce that we of the Blog are on the same side as President Trump with this one.

Our reasons are as obvious as the stars and stripes on the Banner We Wave. You see, in schlocky movies, football jocks are almost horrible characters, top of the cruel food chain in cinematic depictions of high school or college.

Usually they are portrayed as dumb school bullies and would-be rapists who hold sadistic hazing rituals. They torment the cool kids - who are, typically, the only ones who know what to do when aliens or zombies invade – and they play stupid pranks all the time. So much so that when a mad slasher starts killing all the kids, for most of the movie nobody takes evasive action because it’s assumed to be harmless mischief by the moron football players with their practical jokes. Until that scene when some innocent girl (usually played by Jill Schoelen) find the bloody bodies of the whole line of scrimmage stuffed into a row of lockers and knows it’s not them making everybody disappear.

Even Johnny Depp, playing an intelligent gridiron jock, couldn’t hold his own and got eviscerated by Freddy halfway through the first NIGHTMARE ON ELM STREET. If Johnny Depp can’t redeem wearing a jersey, who can?

So there, the men of the NFL and the Cleveland Movie Blogsters: natural enemies. It feels good we can stand with president at last against a clear evil. Unlike when Trump challenges North Korea or Islamic Jihad, when it's harder to pick sides.

So show your support by patronizing, no, not some stupid sports bar or tax-abated pigskin arena this weekend, but Cinema Wasteland in Strongsville.

CW is a twice-yearly gathering/memorabilia festival of “grindhouse” movies and media founded by Berea’s Ken Kish, who has long run a mail-order cult-video business. And, in a salute to the golden era of mom-and-pop video stores, once ubiquitous in just about every strip mall, the fall 2017 CW features stars of the VHS cassette era.

Ah, remember these names? Chains like Mammoth Video, Hollywood Video, Blockbuster Video, and the smaller York Video, Storytape, Midnite Video on Memphis Avenue (especially sought after by cultists for keeping the rarest and oldest stuff on the shelves and sorting it out by release label), and the incomparable B-Ware Video & Books of Lakewood.

A diversity of movies screening include the well-remembered Chester Himes crime-novel adaptation COTTON COMES TO HARLEM, Dyanne Thorne’s ILSA, THE TIGRESS OF SIBERIA (showing us why Trump is so tight with Russia), and the recent HOBO WITH A TRASH CAN (an anthology-movie riff on another  cult great, the Rutger Hauer mini-classic HOBO WITH A SHOTGUN).

Plus vendors of VHS, DVD, Blu-ray and zoned-out books, music, posters, comics and merchandise, the after-hours room parties, and the Son of Ghoul emceeing cartoon blocks and Three Stooges material.