[THE GIRL WITHOUT HANDS screens Thursday September 21st at 8:50 pm and Friday September 22nd at 7:30 pm at the Cleveland Cinematheque.] 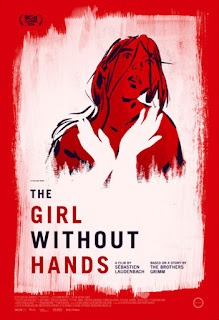 It’s a given in fairy tales that when someone makes a deal with a supernatural being, be it a witch or whatever the heck Rumplestiltskin is, there’s going to be a catch. In THE GIRL WITHOUT HANDS a poor woodsman trades “what is behind [his] mill” to an incognito Devil for wealth, thinking all he is giving up is his apple tree. What the woodsman doesn’t realize is, at the time the deal is struck, his daughter is in said apple tree, making her part of the package.

As is often the case with fairy tales in their purer forms (and this adaptations sticks fairly close to the Brothers Grimm text), this one is probably too dark and loaded with subtext to qualify as children’s fare. The idea of a father lopping his daughter’s hands off to make good on his deal with the Devil is certainly nightmare fuel. And when the handless girl eats pears from a Prince’s garden, it certainly seems suggestive of something else. Or maybe my mind’s just in the gutter, and sometimes a cigar (or pear) really is just a cigar (or pear).

Regardless, it’s fair to say that THE GIRL WITHOUT HANDS is more art film than kid flick. The animation style is simple and stylized, and the tone and energy level are serious and subdued. The pacing is leisurely, but for those receptive to its charms it casts an enticing spell. Even without the mature subject matter, dismemberment, and brief nudity, it would be hard to imagine this working as kiddie fare for those raised on a diet of Pixar and Minions movies. Serious aficionados of animation, on the other hand, will very likely want to seek this out. 3 out of 4 stars.
Posted by Bob Ignizio at 4:44 PM