Repost: Halloween (September 21st and 22nd at the Cleveland Cinematheque) 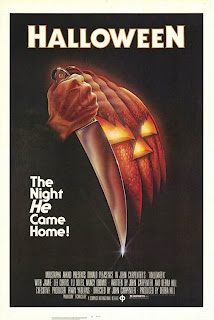 Has it been 35 years? Really, THIRTY-FIVE YEARS! since I heard locker-room whispers around the NE Ohio high school I attended that there was a new movie out called HALLOWEEN, by that maverick director John Carpenter who had previously done that attention-getting, whacko low-budget science-fiction flick DARK STAR (a film-school project that had won bonus re-release to cash in the success of STAR WARS).

And HALLOWEEN was talked up by my youthful classmates as the coolest thing ever; all the guys on the football team were going to get stoned with their skank girlfriends and see it again on the weekend.

I took that rave with a slight bit of skepticism. Much as I admired DARK STAR, this was the late 1970s, remember. And Ohio kids would get stoned to go see a roadshow return engagement of THE SOUND OF MUSIC, as long as someone brought the keg and the dope and the skank girls.

Thirty-five years! I must confess, as a teenager I did have higher hopes for myself by this time in the future. I'd have said goodbye to Cleveland long ago, guest-hosted Saturday Night Live, been in documentaries and TV production, traveled the world, driven incredible cars, written books, made my mother proud of me. Instead...LeBron James did all that. Well, except for books; I did write several. LeBron gets books written about him.

But yes, it was 1978 when the original HALLOWEEN, made quickly and cheaply in Pasadena for less than half a million dollars by Carpenter, caught on, slowly at first in those old, analog days, but building and building on word-of-mouth business and the recommendations of a few brave tastemaker critics (Roger Ebert and Gene Siskel, especially) who recognized its brilliance. The simply-plotted shocker became a worldwide hit that inspired a plague of trashy lookalikes (of which the entire FRIDAY THE 13TH series was hardly the worst offender), in which undifferentiated maniacs slashed into sex- and prank-crazed teenagers for years and years afterwards. Viewers have been watching this legendary thriller ever since, even stained as it is with its own heritage of bad sequels and remakes.

Carpenter's original HALLOWEEN is a textbook-effective scare machine, done with more taste and subtlety than the clones (you rarely ever see any blood; you just think you do). Carpenter seems to have an inborn sense of exactly where to put the camera, how to light a scene, and what to have going on in the frame to make you jump the highest. His use of careful silences and sudden bursts of his now-iconic pulsating musical score are especially unnerving and effective.

(In 1998, for the old Cleveland Free Times, I had an opportunity to interview John Carpenter in a press-conference milieu in LA. I really wanted to ask that when he devises a setpiece scene, what comes first in his mind, music or image? It's a good question, don't you agree? But I never had the chance, with some other showbiz-press in the room being old pals of his, and they monopolized the session with small talk. That question was never asked, or answered. And it does seem to me that my life afterwards started its decline. Guess that was the tipping point. Who can know what would have happened if Carpenter had answered my question and it went into my article. Perhaps the 2000 election would have gone to Al Gore. Perhaps Osama bin Laden would have called off his attacks. Perhaps I still could have gotten to where LeBron is now. Perhaps a nice girl would have liked me. Okay, that last one's pretty farfetched; back to the review...)

The minimalist plot begins on Halloween in the small town of Haddonfield, Illinois, in 1963, with a sequence (made to appear like one long, continues take) from the POV of a marauder, Michael Myers, who stalks and kills his own sister after she has sex with her boyfriend. When Carpenter's camera cuts away, we get the chilling revelation that Michael is just a little boy (I suspect the nude scene by a Playboy-pinup actress was primarily what fascinated the guys at my school, not so much the mise-en-scene).

The plot skips to 15 years later, when Michael's psychiatrist, Dr. Loomis (Donald Pleasance) finds that the now-adult murderer, long catatonic, has escaped from the asylum, on the anniversary of the murder. Dr. Loomis declares that Michael is heading to Haddonfield to kill again.

Michael - only a vaguely-glimpsed masked figure for most of the movie - lurks around the suburban streets adjacent to the long-vacated Myers house. Apparently just because one of them jeered at him from the sidewalk, Michael fixates on three high-school girls, who look forward to hot dates and marathon horror-movie watching on trick-or-treat night - all except for bookish Laurie (Jamie Lee Curtis), who has to baby-sit. While Loomis leads a skeptical sheriff around the town in search of Michael, the stealthy killer slays the schoolmates, one by one, until only Laurie is left, terrified but resourceful enough to fight back.

Why Michael is doing all this is a mystery (crap sequels eventually decided that Laurie was another of Michael's sisters), but Carpenter uses that as a strength rather than a weakness, Dr. Loomis repeatedly saying that the enigmatic Michael is nothing remotely human at all, just elemental, unmotivated Evil, moving robotically and hiding his/its human face behind a blank-looking mask (which, as every horror fan knows, was a store-bought William Shatner-Capt. Kirk face, slightly doctored). When we finally glimpse Michael under the mask [SPOILER ALERT], he's just as ordinary looking and expressionless. To the little children being baby-sat, he's no mystery - he's the boogeyman.

The inevitable followups were just pale imitations of the Michael stalking-and-killing formula, with the strange exception of HALLOWEEN 3: SEASON OF THE WITCH, a movie that just tried to use the HALLOWEEN brand name on a stand-alone plot about a high-tech Celtic sorcerer of modern times peddling deadly, booby-trapped Halloween masks. It was unbelievably awful, and not a good scriptwriting experience for legendary British fantasy scripter Nigel Kneale. But at least it was different. [Editor's note: Well, not all of us at the Cleveland Movie Blog think it's completely awful - see this defense from last year's '31 Days of Halloween'.]

For the whole strange saga of the HALLOWEEN franchise, good and bad (and baaaaad), check out the documentary HALLOWEEN: 25 YEARS OF TERROR, released in 2006, even though it ignores the Rob Zombie-directed remakes. For the best, check out Carpenter's initial masterwork in its re-release this week. Ohioans, try not to be stoned this time, I promise you'll get more out of the experience. And stay away from the skanks. (4 out of 4 stars)