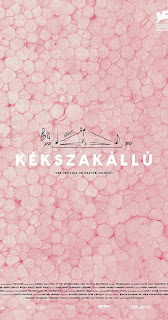 The best scene in KEKSZAKALLU, and the one that best encapsulates what the film is about, is its very first. It takes place on the diving board of a public swimming pool, where we watch several adolescent boys enthusiastically launch themselves into the water below. Then an adolescent girl walks to the end and pauses, contemplating what it is she is about to do. She hesitates, and looks back. We never do find out if she takes the plunge.

The scene is a metaphor for the uncertainty that comes with the transition from childhood to adulthood, which this film seems to argue is more difficult and ambivalent for females than males. Various vignettes follow a small group of young women as they navigate this transition. There is little concern with traditional narrative or story, focusing more on creating an atmosphere in which to explore its central theme.

Argentinian writer/director Gastón Solnicki has said that KEKSZAKALLU is loosely inspired by Bela Bartok’s opera ‘Bluebeard’s Castle’. We hear portions of this opera on the soundtrack, but not being familiar with the original work I can’t comment on how and to what degree they inform the film.

This is the kind of film that will be frustrating to the average viewer, and probably even to some arthouse fans. It would be fair to call it a plotless and distant work that, having made its point in the aforementioned first scene, never really has anything else to say. It’s a mood piece, and the audience for such films is decidedly limited.

Nonetheless, Solnicki offers those viewers willing to go along with him some compelling imagery. And as the film reaches its conclusion, it offers another especially well realized sequence that leaves the fate of its characters open to interpretation, while clearly suggesting not all of them have happy endings. It would be inaccurate to say I enjoyed the film, and at times I was frankly bored by it. And yet, there are also aspects that made an impression and will likely stick with me. Hard to assign a star rating to something like that, but we’ll go with 2 ½ out of 4.
Posted by Bob Ignizio at 9:16 PM