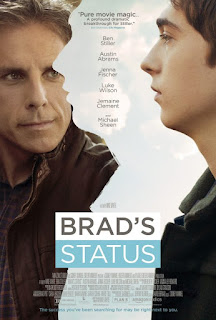 We hate it when our friends become successful – Morrissey


What is it about dads that makes people cry? Regret about words unsaid to a dad now dead, issues unresolved, or just the general poignancy of the role of fathers, who are expected to be strong but not domineering, caring but not soft, and whose approval or disapproval can launch a child into a lifetime of success or a spiral of despair?

Recently on “Fresh Air,” the long-running interview program on NPR, host Terry Gross brought filmmaker Mike White to tears about his father. Granted, that is not unusual for Gross, whose pop-Freudian probing is designed to make her subjects weepy. White was talking about his love and gratitude for his father, Rev. Dr. Mel White, to whom Mike's new film, BRAD'S STATUS, is dedicated. About the film, White said, “I wanted to write something to tell my father I love him and think he is a success, even though he feels like he never lived up to his expectations for himself.”

The story, about a California father taking his teenage son to visit elite East Coast colleges and dealing with feelings of failure in comparison to his much more successful college friends, is based in part on White's own experience on a college tour with his dad. White's dad is a clergyman and author who worked as a ghostwriter for Christian right figures like Billy Graham, Jerry Falwell and Pat Robertson, and who later came out as gay and became an LGBT activist. White's childhood was unusual – he has amusingly described his experiences attending an Evangelical day camp — but he is close with his 77-year-old father, with whom he appeared on the reality show “The Amazing Race.”

In his script, White projects himself into Brad (played by a perfectly cast Ben Stiller) and his son, Troy (Austin Abrams). He's both the middle-aged man comparing himself unfavorably to his age peers, with their private planes and fabulous homes, and the boy who's embarrassed by his father in front of other students at the college he wants to attend (in this case, Harvard). “Like Brad, I'm always having this running commentary in my head,” White explained, “comparing myself to others and the success I perceive they have — and I'm always either building myself up or tearing myself down.”

Social media, of course, plays a role in this punishing process; Brad can't keep himself from gaping at his classmates' shiny successes on Facebook and Twitter. “I thought movies rarely tackle this aspect of our lives in a relatable way,” White said, “how our thoughts about ourselves cannibalize most of our time. And how much we feel is on the line all the time.”

White is a Buddhist, animal rights activist, and a writer of films that are philosophical but eminently relatable. His films, in which he often acts, usually focus on women protagonists wrestling with moral and spiritual issues, or flailing against a culture that does not accommodate their ideals. His superb HBO series “Enlightened” starred Laura Dern as an executive who has an emotional breakdown, has a spiritual awakening in rehab, then tries to make a comeback at her former company, where her newfound values clash with the corporate ethos. YEAR OF THE DOG (2007) was about a woman's growing commitment, amid the falling apart of her life, to animal rights. This year's BEATRIZ AT DINNER, written by White and directed by frequent collaborator Miguel Arteta, dramatized a confrontation between an idealistic vegan massage therapist (Salma Hayek) and a big-game-hunting real estate tycoon played by John Lithgow.

Much of BRAD'S STATUS is an interior monologue by Brad as he compares himself unfavorably to his very successful classmates from Tufts. The Tufts gang's diaspora includes Nick Pascale (played by White in amusing silent segments), a Hollywood director with a hot husband and a house featured in Architectural Digest; Billy Whearsilter (Jermaine Clement), who sold his tech company and bought a Hawaiian island, where he cavorts with two beautiful “wahine”; Jason Hatfield (Luke Wilson), a super-rich hedge fund manager with a private plane; and Craig Fisher (Michael Sheen), a Washington pundit who writes best-selling books and is recognized by all from his frequent television appearances.

Brad followed a different path: influenced by a beloved professor and his idealistic wife, Melanie (Jenna Fischer), he founded a nonprofit consulting agency. Like many of us at midlife, he wonders if his choices mean he's a failure. “It's stupid to compare lives,” he admits, “but over time these feelings get worse. I feel I failed I'm not where I thought I'd be. This is not the life I imagined.” Even the city he lives in, Sacramento, is “a secondary market of mediocrities and Beta males.” For a moment, he wonders if it's his wife's fault. “I love Melanie's idealism, but it prevented me from selling out.”

Brad knows he can be proud of his son, Troy, a smart teen who's also a talented pianist and composer. But as father and son travel to Boston for Troy's interviews at Harvard and Tufts, Brad also has to contend with feelings of envy toward Troy, whose achievements are likely to surpass his. It seems Brad was waitlisted, then rejected, by Harvard before landing at Tufts, the wanna-be Ivy. White's scripts demonstrate deep empathy for everyone, including his own father, who took him to tour East Coast schools and sacrificed to help launch him on a successful career path (hence his teary moment on “Fresh Air”).

Brad engages in many a reverie imagining the glittery lives of his former classmates: Jason and his high-powered wife and their privileged kids aboard their private plane; Billy running into the surf with his bikini-clad girlfriends. His jealousy intensifies when he calls Billy and hears that everyone was invited to Nick's wedding in L.A. except him. (Clement is hilarious as the multimillionaire beach bum.) “Whether I was forgotten or excluded made no difference," Brad thinks. "I was off the list. The world hated me, and the feeling was mutual.”

When Troy gets the day wrong and misses his Harvard interview, Brad pulls strings — to Troy's cringing embarrassment — to get him another interview. The string is a call to his friend-turned-nemesis Craig, who's a visiting professor at Harvard. His achievement impresses Troy and gives Brad a moment of fatherly triumph.

Father and son have dinner with Ananya (Shazi Raja), a pretty Harvard undergrad musician friend of Troy's. Brad is enthralled, in a sort of non-sexual way, with Ananya, an idealist like he used to be. He leaves his sleeping son in the hotel to have a drink with Ananya, and lays down his existential burden. She shuts down his self-pity, describing the poverty of people in her home country. “You're 50 years old and still think the world was made for you.” (“I'm 47,” Brad says, but still feels the sting.)

Why, Ananya asked, is he competing with anyone? Brad has an epiphany while dining with Craig, the condescending but nominally friendly former classmate. As Craig spouts gossip about members of their group, Brad realizes that maybe other people's lives aren't quite as sparkly as they seem. Maybe things are just as they are meant to be.

Films with this level of thought are not that common, and for that reason I am grateful that there is a Mike White. 4 out of 4 stars
Posted by Pamela Zoslov at 12:00 AM