Whose Streets? (opens September 1st at The Capitol Theatre and The Nightlight Cinema)

[WHOSE STREETS? opens on Friday September 1st at The Capitol Theatre in Cleveland, and at The Nightlight Cinema in Akron.] 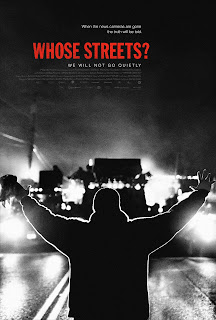 It's been three years since Michael Brown, an unarmed 18-year-old, was shot to death by police officer Darren Wilson in Ferguson, Missouri, after being stopped for walking in the middle of the street and reportedly raising his hands in surrender. Brown's body was left to lie in the streets for hours. “It was a lynching,” said Brown's mother, Lesley McFadden. “My son was laying in the streets four and a half hours.”

The incident, one of more than 1,000 police killings that year in the U.S., became a flashpoint for protest and activism. WHOSE STREETS?, a documentary by Sabaah Folayan and Damon Davis, focuses on the aftermath of the Brown killing. Davis, a St. Louis artist, was filming the street protests and was joined by Folayan, a journalist who turned to film because she felt the news media wasn't accurately capturing the experience on the streets.

Comprised largely of on-the-ground footage of the protests and interviews with local activists, the film captures the people's rage and demands for justice. The filmmakers focus less on the details of the Brown killing — many of which were deliberately muddied — than on the country's long and bloody history of racial injustice. Relevant historic quotes illustrate the film: Supreme Court Chief Justice Roger Taney's infamous Dred Scott decision, in which he wrote that blacks had “no rights which the white man was bound to respect”; Martin Luther King, “A riot is the language of the unheard.”

The protesters, along with their young children, chant “Hands Up, Don't Shoot!” Their young children hold up signs bearing that message, decorated with tiny pink palm prints. The film weaves in television news coverage that focuses almost entirely on the burning and looting of a convenience store, coverage that inflamed racist sentiment. “We had peaceful protest all day, a candlelight vigil,” says one protester. “That wasn't the story you heard about.” Instead the media narrative was, in a typical cable news chyron, “Night of Looting and Fires.”

An activist named Kayla reflects on the valuing of property over lives. To the media, she says, “a building burning is worse than a black body.” A building, the activists reason, can be rebuilt, but, says the rapper T Dubb O, “No wizard on this planet can bring back Mike Brown Jr.”

The Black Lives Matter movement, birthed in the aftermath of the Trayvon Martin murder in 2012, became nationally recognized after the deaths of Brown and Eric Garner, the man choked to death by a police officer in New York City for selling loose cigarettes. Whose Streets? — titled after the protest chant “Whose Streets? Our Streets!” — focuses on several activists: Hands Up United co-founder Tory Russell, nursing student and single mother Brittany Farrell, and David Whitt, a recruiter for the civilian organization Cop Watch, who films police activity. “I go out with my camera,” says Whitt. “That's my weapon.”

One of the film's interesting revelations is the activists' youth. Today's generation of social justice warriors are zealously committed to fighting injustice, fighting battles mistakenly thought won in the '60s. They are trying to create a better world for their children, and consider their activism a teachable moment. Dropping off her young daughter at school, Ferrell says, “I want her to think for herself and resist.” Her daughter worries about her mom's safety — “What if the police shoot you like they killed Mike Brown?” — but like many of the activists' kids, she is actively involved in the movement. Another woman explains that they are planting seeds of change, “We are raising activists. That's where the change is gonna come.”

The Ferguson protests launched a global movement. It also brought into depressing focus the militarization of local police forces. For five nights, Ferguson's police confronted nonviolent crowds as if prepared for war, with military gear and weaponry: body armor and camo, armed vehicles and rifles based on the military M4 carbine. They shot at protesters with large rubber bullets, and used tear gas and smoke canisters. “All this is chemical warfare,” says one demonstrator. “You're not supposed to be able to use these on U.S soil.” Then president Barack Obama issued an executive order limiting local police access to military surplus equipment; this week, Donald Trump reversed the order, a move that falls in line with his pardon of lawless Arizona Sheriff Joe Arpaio and his encouragement of police brutality (“Don't be too nice” to people in custody, Trump told a group of police officers).

The film recounts the Ferguson police department's release of surveillance footage that supposedly showed Mike Brown committing a “strong-arm robbery” at a store before being gunned down by Officer Darren Wilson, a misleading piece of evidence unrelated to the killing. “It had nothing to do with the stop,” says one protester. “So why release the video? They [the police] had six days to get that lie together.”

The anger reaches fever pitch after a grand jury decides not to indict Darren Wilson. One of the lowest moments the film revisits is Wilson's interview on ABC-TV, in which a sympathetic Matt Lauer allows the baby-faced policeman to tell America that he's not at all a bad guy. “I'm really just a simple guy, that's all I am.” He elaborates on his description of Brown, whom he had described in his grand jury testimony as looking “like a demon” and charging at Wilson. Some eyewitness accounts had Brown at a distance, on his knees, shot in the head with his hands up in surrender. The pattern is all too common: an unarmed black man (or child) is considered dangerous to a police officer, whether he's playing with a toy gun by himself in a park, walking down the middle of the street, selling loose cigarettes or CDs, picking up a toy gun for sale at Walmart, driving with a broken tail light, reaching for a wallet.

For all the nostalgic longing in Trumpland for former President Obama, the film reminds us that he was also prone to the kind of “both sides” statements Trump made on the racial violence in Charlottesville. After the non-indictment of Wilson, Obama says, “We are a nation built on the rule of law,” and that it's not his place as president to “put my thumb on the scale one way or other.” It was considerably different from his rather personal statement two years earlier about the death of Trayvon Martin: “If I had a son, he could have looked like Trayvon.” Says one activist, “Tell that nigga he need to teach a new [constitutional law] class, bring his ass to Ferguson and figure out why we ain't got no Constitution.”

Mike Brown's killing took place in an area with a long history of racial injustice. Says one black resident, “I don't know what year it is [in St. Louis], but it's not 2014.” In March 2015, the Obama justice department issued a scathing report on Ferguson's racism and bias. An adjacent town, Jennings, Mo., was fined $4.7 million for running a “debtors' prison” that jailed mostly poor, black residents for unpaid court debts, mostly traffic fines. During the Brown demonstrations, a Ferguson police officer was caught on tape saying to protesters, “Bring it all, you fucking animals!”

Amid this atmosphere, the film captures the rage, courage and determination of the resistance. “If I'm gonna die,” says Tory Russell, “I'm gonna die for a real reason.” 3 1/2 out of 4 stars.
Posted by Pamela Zoslov at 12:00 AM