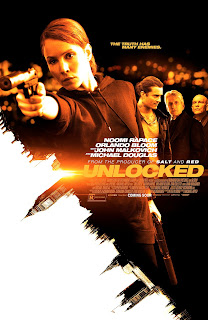 In this densely plotted political thriller, CIA agent Alice Racine (Noomi Rapace) is still dealing with guilt for a terrorist attack she couldn’t stop when she gets called back by her former superior (Michael Douglas) to help stop a biological attack. The virus being used, we are told, “may just trump Ebola for the nightmare trophy.” Overseeing the operation from afar with no shortage of snark is Bob Hunter (John Malkovich).

Unbeknownst to either Alice or Bob, another faction of rogue intelligence agents have a different plan in mind. It is these morally dubious individuals who pick Alice up and bring her back to interrogate a courier who is being sent by his Imam not to launch a terror attack, but to stop one. They plan to eliminate Alice once she gets the information they need from the courier, but she realizes what’s happening and manages to escape.

Alice looks for help from her former mentor Eric Lasch (Michael Douglas) while she tries to piece together the plot, but the bad guys show up at his apartment and start shooting up the place. Again, Alice manages to escape, eventually finding an ally in British intelligence commander Emily Knowles (Toni Collette). Amjad (Tosin Cole) is a civilian from Alice’s cover job who offers his help. Orlando Bloom is also on hand as the obligatory Odd Job/Jaws type secondary bad guy.

There is an awful lot of exposition for a movie that’s just barely over 90 minutes. There are a few competently staged action scenes along the way to keep viewers from falling asleep, but overall UNLOCKED is a decidedly bland affair.

Director Michael Apted has had a long, varied, and distinguished career ranging from his signature UP series of documentaries to prestigious biopics like A COAL MINER’S DAUGHTER and GORILLAS IN THE MIST to the James Bond vehicle THE WORLD IS NOT ENOUGH. He’s not anyone’s idea of a hack filmmaker. Nonetheless, it feels as if he’s just phoning it in here. Granted, some of the blame has to lie with the screenplay, credited to Peter O’Brien, but Apted’s disinterested direction certainly doesn’t help. We’ve also got a first-rate international cast on hand, but aside from Malkovich, who’s just hamming it up, none of them make an impression. The end result is mediocrity personified; technically competent but an utter snooze to watch. 2 out of 4 stars.
Posted by Bob Ignizio at 12:00 AM