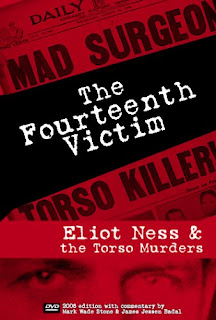 Used to be every Friday the 13th, Paramount would have ready another cheapjack Jason Vorhees slasher-horror movie to open. Well, on Sunday the 13th a very different couple of murder stories will appear at the Capitol Theatre in Cleveland's Gordon Square arts district on the west side.

Mark Wade Stone and his Storyworks production company have been making local-interest documentaries for years, some in association with charismatic true-crime author/lecturer James Badal. Both will be in attendance at special 4 p.m. matinee of malice, spotlighting historic Cleveland crime (besides the records of the sports teams) on the big screen.

THE DAY MARILYN DIED isn't about a certain Hollywood blonde sex symbol but rather the infamous circumstances of the Dr. Sam Sheppard murder case in Bay Village. The killing of Marilyn Sheppard was stated by many to be inspiration for TV's The Fugitive (though the TV series’ creator told critic Richard Roeper that Les Miserables was more the foundation).

Then the short feature THE FOURTEENTH VICTIM recounts the grisly Cleveland Torso Murders of the 1930s and 40s and how the Ripper-type homicides affected the chief investigating lawman, Eliot Ness. Most famously retold in a graphic novel by hot comics writer-artist Brian Michael Bendis, the Torso Murders continue to be raised from time to time as the basis for a potential Hollywood blockbuster.