Tomorrow (August 11th and 12th at the Cleveland Cinematheque) 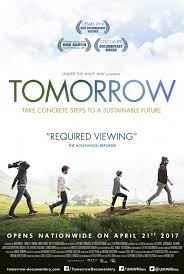 The scientific consensus regarding climate change being real and, at least to a large degree, caused by human activity is near unanimous. Some people still choose to bury their heads in the sand for reasons of politics or profit, but most of the world accepts the reality of the situation. And it’s a reality that, when you really think about it, is kind of terrifying.

The international community (minus, sadly, the United States) is working on solving this problem under the auspices of the Paris Climate Accord. But is there anything that can be done on a smaller, more local level? Plenty, as it turns out.

Writer Cyril Dion and actress Melanie Laurent explore some of those ways in their documentary film TOMORROW. It’s a film that goes beyond the frightening facts to offer hopeful solutions, many of which are already working. And it’s not just in more liberal European countries like France and Denmark. Even here in the United States cities are doing things like ramping up recycling programs, converting open spaces into urban gardens, and increasing the use of bikes and public transportation. None of these things is going to fix the problem of global warming by themselves, but together they can make a dent.

From a cinematic standpoint, TOMORROW is pretty standard issue documentary fare, and despite the heavy subject matter, fairly lightweight at that. This is more a personal journey for the filmmakers as they look for signs there may be hope for their children, and emotion often supersedes cold hard facts in their presentation. It also tends to meander, with a few too many musical montages that add little to the film other than running time, ultimately padding what should have been a taut 90 minutes out to 2 hours. But considering how grim things seem in the world at the moment, the film’s hopeful message is certainly welcome. 3 out of 4 stars.
Posted by Bob Ignizio at 1:14 PM