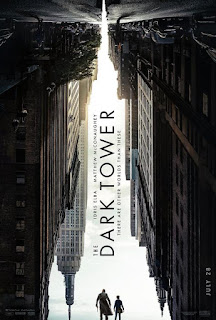 Critics have for the most part been incredibly harsh in their reviews of THE DARK TOWER, the first attempt to adapt Stephen King’s epic fantasy/horror/sci-fi/western series for the big screen. To be sure, the end results are not best of the year list material. But neither are they all that bad. The problem, I imagine, is that with a cast of this caliber (Idris Elba and Mathew McConaughey representing the forces of good and evil, respectively) and the hype that comes with adapting (or, perhaps more accurately, continuing) such a beloved series, expectations were high. Too high.

The fact is, with a budget of 60 million, expectations for THE DARK TOWER should have been more in line with similarly budgeted genre fare like the MAZE RUNNER: THE SCORCH TRIALS or the RESIDENT EVIL films, not something with the scope and production values of HARRY POTTER or THE HUNGER GAMES. One can certainly make the argument that THE DARK TOWER needed a bigger budget to do the source material justice, but for better or worse that wasn’t the case. Given what director Nikolaj Arcel and his team had to work with, the end product really isn’t that bad.

The plot of the film is that Jake (Tom Taylor), a young boy coping with the death of his father, is having visions of another world. A world in which a mysterious man in black named Walter (McConaughey) uses psychic children to launch massive attacks against a gigantic tower. He hasn’t succeeded yet, but he is doing damage. That damage is felt in Jake’s world, too, in the form of earthquakes. In fact, the damage reaches out to multiple alternate realities, with Walter’s goal being to let in evil forces that would ravage the entire multiverse. Jake also sees weary “gunslinger” named Roland (Idris Elba), who might just be the last hope of all existence.

Of course Jake’s visions are real, and of course Jake finds himself pulled into the middle of this apocalyptic conflict. And although he doesn’t seem like much of a hero at first, Jake’s psychic powers (or “shining”, a term Stephen King fans should be familiar with) actually holds the key to which side will win.

So first, the downsides. The plot is by the numbers, the dialogue is strictly utilitarian, the effects nothing to write home about, and the overall feel is of a mid budget movie pushing it’s resources to the limits. The film also falls short on its emotional level, with Jake getting over some pretty heavy stuff far too easily.

But while this may be a “B” movie, Elba and McConaughey still bring their “A” games. The action is plentiful and fun, and there are some fun Easter eggs for Stephen King fans scattered throughout in such a way as not to distract from the overall film. Those things help, but not enough to make up for all the film’s issues. Still, even if I can’t give it my whole-hearted recommendation, I can say I was entertained. Take that for what it’s worth. 2 ½ out of 4 stars.
Posted by Bob Ignizio at 3:01 PM