[ONCE UPON A TIME opens in Cleveland on Friday August 11th at Cinemark at Valley View.] 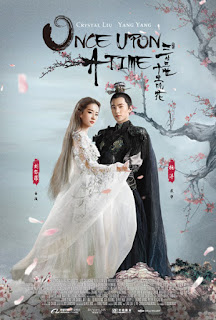 There’s a whole lot of plot in the epic action/romance/fantasy film ONCE UPON A TIME. Like, literally three lifetimes worth of plot. And not just ordinary lifetimes, but the lifetimes of immortal Chinese gods who live for hundreds of years, then get reborn to live hundreds more.

As is often the case in movies about gods, whatever their nationality, there’s lots of scheming and plotting by one deity against another. In this case, Bai Qian (Liu Yifei) is the immortal being plotted against, although we don’t initially know the details of who is doing the plotting or why. All we know when we are first introduced to her is that she has fallen from the heavens, and upon landing on earth, has lost much of her memory.

Bai is an ancient goddess several centuries old. She is promised in marriage to Ye Hua (Yang Yang), a much younger immortal who claims Bai is his wife, and that they have a son together. Bai does not believe Ye Hua at first, but eventually we learn the complex and convoluted tale of how everyone fits together, and of the nasty “Demon Clan” gods and goddesses responsible for their woes.

ONCE UPON A TIME is epic cheese, to be sure, but not without its appeal. While not on a par with such classics of Chinese romantic fantasy as THE BRIDE WITH WHITE HAIR or A CHINESE GHOST STORY, it does deliver on all the expected genre elements. The leads are attractive and likeable, and when the romance portions of the story threaten to get dull, there’s always a fight scene or CGI creature just around the corner to perk things up.

The film is co-directed by Zhao Xiaoding and Anthony LaMolinara. They're work is competent and full of vibrant colors (Xiaoding did cinematography on several of Zhang Ymou's films), but despite that it never feels as if there's any distinctive style or flair. The effects are not on a par with what audiences have come to expect from American blockbusters, but they’re not distractingly bad, either. The film can be a bit hard to follow at times as it jumps back and forth to the different incarnations of the characters, and it doesn’t help that the subtitles flash by rather quickly, there being more dialogue here than in your average Chinese action film.

Nonetheless, you'll get the gist, and that should be enough to enjoy the film for what it is. It’s not likely to cross over to mainstream audiences the way CROUCHING TIGER, HIDDEN DRAGON or HERO did, but the dedicated fans of this kind of film should be pleased to see a relatively good one on the big screen in the U.S. 2 ½ out of 4 stars.
Posted by Bob Ignizio at 1:05 AM