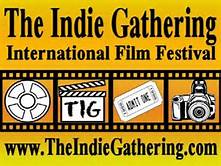 Let us now examine some of the bloated cinematic corpses from the movie year of 2017. Nobody much wanted to see the live-action GHOST IN THE SHELL. Or Universal Picture's second (count 'em) reboot of THE MUMMY, as a Tom Cruise actionfest. The once-unsinkable PIRATES OF THE CARIBBEAN sequels stumbled with number five, and movie spoofs of BAYWATCH and CHiPS saw quick cancellation!

Finally...THE EMOJI MOVIE. Bob Ignizio actually saw that one and didn't even bother to review it. There can be no lower praise.

With all that waste of millions in resources, time and talent, how about a film festival that really celebrates the struggling indies of the world, bravely getting entertainment done on a shoestring budget.

The Indie Gathering, held annually in the late summer at the Clarion Inn of Hudson, upholds local/international `microcinema' – shorts and features done by independent filmmakers, today most often working (and working wonders sometimes) in digital video.

Come to Hudson for the long weekend, meet visiting filmmakers as well as local heroes like Johnny Wu and Bill Johns, and see marathon screenings of documentaries, dramas, shorts and features. Not all look chintzy or student-film-ish either; one stars French cinema icons Jean-Marc Barr and Jane Birkin, while the partially Cleveland-shot LUX IN TENEBRIS features Oscar-caliber actor Eric Roberts.

Meanwhile, Mikhail Tot's IN PRODUCTION is a local insider comedy feature about the travails of trying to shoot an indie movie in Cleveland (oh, so it's torture-porn horror?).

There is also a special Latino-oriented program, a drive-in movie night (weather permitting) with sci-fi/horror oriented stuff projected on the outside of the hotel, and panel discussions, contests, networking, a vendor fair and how-to demos.

Admission to individual movies are $7. Some parts of the Indie Gathering require a full check-in at the hotel. For a full schedule, go online to www.theindiegathering.com

Posted by Charles Cassady Jr. at 3:21 AM