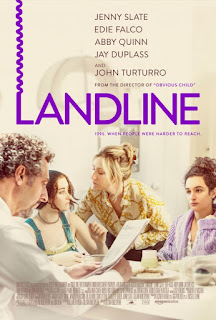 Gillian Robespierre's new comedy, LANDLINE, has many traits in common with her debut feature, OBVIOUS CHILD, which got a lot of attention due to its abortion story line. Both films focus on the romantic/sexual misadventures of a young woman played by comedienne Jenny Slate, and are sprinkled with copious amounts of scatological humor alongside some funny and affecting moments.

LANDLINE gets its title from its setting, 1995 New York, where the characters inhabit a world of obsolescent technology: boomboxes, manual rowing machines, dot matrix printers, and the eponymous corded phones. It is primarily a family comedy — not for families, given its crude language, but about the family of Dana (Slate), a young woman who is engaged to marry Ben (Jay Duplass), whom she has come to see as boring, sitting up in bed as he does, raving about items in the Hammacher Schlemmer catalog. Dana finds herself attracted to an old college friend, Nate (Finn Wittrock), and ends up sleeping with him, putting her wedding plans in jeopardy. She leaves Ben for a time to move back in with her parents.

Dana's younger sister, Ali (Abby Quinn), has been cutting high school, smoking, defying her parents to go clubbing, having sex with boyfriend (or friend-boy) Jed (Marquis Rodriguez), and, at a friend's persuasion, has started using heroin.

Robespierre, who wrote the movie with Elizabeth Holm, is considerably less revolutionary than her 18th-century namesake. The comedy has a familiar, well-worn quality that the salty language doesn't make more interesting or edgy. (Sample exchange between the sisters: “You're like toilet paper stuck to the bottom of my shoe.” “You're the embodiment of constipation!” And, of course, there's stuff like “Fuck you, cunt!” and “You're a come guzzler!”) The soundtrack is studded with '90s music (10,000 Maniacs, PJ Harvey, the Breeders, Pavement).

The predilection for gross humor aside, there are some nice moments in which the two sisters bond, dancing and swimming and staking out Dad's possible mistress. Many of the family scenes are good: Dad giving Dana realistic advice about life choices; trying to entertain his daughters by catching shrimp in his mouth tossed by a hibachi cook at the family's favorite Japanese restaurant; and bringing his family to the reading of his bad play. And then there is Mom, who sees through Ali's lies about her whereabouts and suspects her husband's affair, going to a club and dancing with a stranger, reliving her halcyon disco days. Turturro and Falco are outstanding, though one wishes Falco, a fantastic actress, would get some roles that went beyond “worried mom.”

Dana describes herself as “flailing.” She dithers over marrying Ben. She gets her eyebrow pierced; it gets infected. She discovers that Nate, though sexy, is not the man she hoped, and realizes that she, like her dad, is a “cheater.” Ali enlists her in a Halloween-night heroin-buying excursion; dressed as California Raisins (more of an '80s thing, I think), they emerge unscathed, their dangerous misadventure amounting to no more than youthful hijinks.

Slate, a former Saturday Night Live cast member, is effective as Dana, but she's an acquired taste, crass and a little obnoxious. That may be the point; I suspect she's an alter ego of Robespierre (they look rather similar). But Dana's unloveliness, in appearance and behavior, makes you wonder about Ben's abiding loyalty to her, especially after she cheats on him. Young Abby Quinn is nicely intense as the rebellious Ali.

The script focuses almost entirely on the characters' sex lives, to the exclusion of almost everything else, like jobs, school and, I don't know, life? Dana works as a layout artist, which we know only because she calls in sick one day with a fake intestinal complaint so she can go CD shopping and flirt with Nate. On the positive side, the movie has an agreeably breezy tone and the good taste to not outstay its welcome at an hour and 33 minutes.

There are some oddities in the movie's timeline — for example, did the parents really see Lenny Bruce at a nightclub? I think they'd be a lot older, and probably wouldn't also have Studio 54 in their youthful past. Interestingly, many of the characters are considerably younger than the actors who play them (Slate is 35, Duplass 44 and Turturro is 60). In that way, Chris Teague's underlit, sometimes murky cinematography, which also was featured in OBVIOUS CHILD, is an advantage. Two and three-quarters out of four stars
Posted by Pamela Zoslov at 12:33 AM