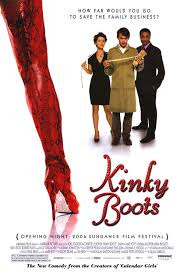 When you consider that the alternative for shoe fetishists are crush videos, this British fairy-tale-in-more-ways-than-one is mostly harmless. And its verrrrrry gay-friendly premise got it spun off into a stage musical (naturally). Hard not to suspect director Julian Jarrold and the producers didn't have that cross-media platforming in mind from when KINKY BOOTS made its film debut in 2005.

Allegedly it's based on a true story (and comparisons to THE FULL MONTY won't end there). Charlie Price (Joel Edgerton) is a reluctant inheritor of his family's faltering shoe-factory business (est. 1895) in Northampton. Finding it antiquated and in a state of financial ruin, Charlie goes through a Cleveland-like round of painful layoffs when inspiration strikes - partially provided by Lauren (Sarah-Jane Potts), the sassy working girl he's firing, partially inspired by a strapping Afro-Caribbean drag queen Lola (Chiwetel Ejiofor) he accidentally encounters in London.

Charlie, Lauren and Lola team up to re-position Price & Sons for a new niche market: cross-dressing men's shoes, or more specifically, boots. Ones with steel-reinforced stiletto heels for supporting big-and-tall transvestite's weight, a special pocket for a riding-crop, and a bright red veneer. "Red...the color of sex!" Lola exults.


"Two and a half feet of tubular sex!" the once-tweedy Charlie later echoes. A lot of this is the sort of thing seen in the liked of CALENDAR GIRLS and MISS HENDERSON PRESENTS, the farce of Brit blokes and biddies, practically out of Wallace & Gromit, dealing in stiff upper-lip fashion with uninhibited sexuality and the hedonistic opulence represented by the tran-tastic Lola - who, for all his he-she suggestiveness, doesn't manifest an onscreen physical relationship with anyone the whole time. Really, Tom Hanks got more action in PHILADELPHIA.

Pat obstacles to overcome include the expected homophobia from Don (Nick Frost), the shop-floor bruiser, and the upper-class Thatcherite disapproval of Nicola (Jemima Rooper), Charlie's materialist live-in fiancee. Most of it is predictable in the extreme, with some third-act complications thrown in merely because rules of drama dictate that the third act needs complications. But don't worry, no adversity can't be put right by drag musical numbers.

The cabaret routines are fun enough to make you wish the storyline were on par with ADVENTURES OF PRISCILLA, QUEEN OF THE DESERT, an obvious inspirations. Even when KINKY BOOTS arrived in multiplexes the mass-marketing of drag culture was starting to look more tame and market-driven than outrageous and transgressive. Oh well, it got turned into a musical. And in LGBTQ culture there seems to be no higher compliment, outside of the cover of Sports Illustrated. (2 1/2 out of 4 stars)