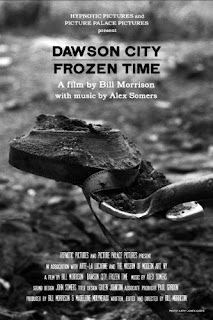 Part time capsule and part tone poem. A piece of history but also a work of art. That’s what director Bill Morrison has crafted in his documentary feature DAWSON CITY: FROZEN TIME.

First and foremost, the film tells the fascinating story of how a treasure trove of silent film reels was discovered buried beneath the ground in the small Canadian town of Dawson City in 1978. These reels, from the 1910s and 1920s, were used as landfill. Tossed away like garbage. And ironically, it was that fate that saved them from deteriorating or bursting into flame like so many silent era films that utilized nitrate film stock.

But this is anything but a typical, straight forward documentary. Like the films themselves, it is silent except for a music score (and a few brief interview segments at the beginning and end of the film). Instead, Morrison has edited together portions of the films that were discovered, along with still photos and archival footage, to tell the story not just of how the films came to be lost and found, but so much more. Captions and old newspaper articles, rather than narration, impart the pertinent details.

All of this is intertwined quite naturally with the story of Dawson itself, and it’s interesting to learn some of the ways a rough and tumble mining town would go on to influence the wider culture. Such notable figures as Alexander Pantages and Sid Grauman began their theater careers providing entertainment to the miners. Even Donald Trump’s grandfather Fred figures in to the story. Having set out for Dawson, he wound up stopping short to run a successful hotel that was a stopover for many looking to find their fortune further north.

Not unlike FRAUD, a film that played earlier this year at the Cleveland International Film Festival, DAWSON CITY: FROZEN TIME really brings to the fore the role that editing can play in shaping a film. There are some actual films of Dawson, but much of what we see are clips from Hollywood productions that have been cut together to form a narrative they were never meant to tell. The result is a compelling and dreamlike film. 4 out of 4 stars.
Posted by Bob Ignizio at 12:57 AM