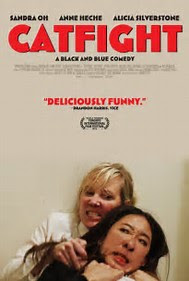 Though they will probably deny it, I worked for the Cleveland International Film Festival for ten years. And CATFIGHT is the sort of film-fest indie entry I came to know all too well, a guaranteed attention-getting hot ticket (well, of course it would be, as I would be writing the PR promos), with a high-concept premise and a hint of the unspeakable that would guarantee a sellout at showtime.

But after the festival, in the cold, harsh light of the mainstream marketplace…such look-at-me-ma!-I’m-a-cool-transgressive-filmmaker! stuff would just disappear into the annals. Maybe one or two copies might show up at Blockbuster (or more likely Hollywood Video, who dared try their own indie label there towards the end).

Separated from the excitement, and pretense, the hype and the ego of the film-festival scene, such movies just don’t look as special as they want to look. And such is the case with writer-director Onur Turkel's dark comedy.

Don’t get me wrong, the pitch-black feature has some delightfully transgressive moments. But it's ultimately a little too schematic for its own good, and not quite as clever as it pretends.

The stark three-act storyline centers on the violent reunions of two women over a period of years. Veronica (Sandra Oh) is the snooty trophy wife of a government contractor in Manhattan, who is about to get even wealthier with profits off a looming US military action in the Mideast (it’s not spelled out, but material may take place during the Bush Administration). But there is trouble in their yuppie paradise, as the husband barely conceals his contempt for her and may, in fact, be gay. Their sensitive adolescent son also seems ready to bolt.

As Veronica throws a posh party, she re-encounters her old college frenemy, Ashley (Anne Heche), an abrasive lesbian artist specializing in violent imagery, but forced – as there is no market for her canvases - to cater meals for a living.

One insult leads to another, and the two wind up in a brutal, drunken apartment-stairwell brawl that leaves Veronica comatose for two years. Miraculously she revives - only to learn she is now penniless. The war destroyed her family, while Ashley's gruesome canvases (actually completed by her abused personal assistant), during an era of high body counts, have won the Sapphic attacker acclaim, fame and fortune.

Now it’s Veronica who has eke out a living doing menial housecleaning, while Ashley is the toast of the gallery world. You can guess what happens when fate brings Veronica and Ashley together again.

The money-shot fight scenes, shocking as they initially are (an entire DVD extra is devoted to how the leading ladies and their stunt doubles did the grueling brawls), lose their impact through repetition (and Turkel's decision to camp it up with classical music on the soundtrack).

By the time the thing ends we’ve seen the ladies bash each other bloody three times over and, well, that’s it, basically. Observations about society’s hypocrisy and class structure are pointed, but obvious. Bottom line is, CATFIGHT is much the type of grotesque movie the Ashley character would have created if she'd gone for cameras and editing suites instead of brushes and abused personal assistants. And outside of the intellectual-snob gallery/film-fest environment in which a character like her thrives, it doesn’t hold up much. (2 ¼ stars)