[THE LITTLE HOURS opens in Cleveland on Friday July 14th exclusively at the Cedar Lee Theatre.] 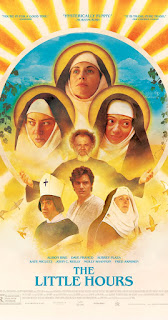 A trio of 14th century nuns – Alessandra (Allison Brie), Ginerva (Kate Micucci), and Fernanda (Aubrey Plaz) – try to make the best of their lot in life in the deadpan comedy THE LITTLE HOURS. They fight among themselves, but come together to tear into the convent’s hired help. So brutal is their most recent barrage of insults and abuse that the gardener turns in his notice, leaving Sister Marea (Molly Shannon) short handed.

Meanwhile, Father Tommasso (John C. Reilly) sets off to sell various wares made by the nuns in the nearby village. Unfortunately he’s been getting into the communion wine and ends up overturning his cart in a stream, ruining everything he meant to sell.

The one bright spot in all this is that the good Father runs into Massetto (Dave Franco, brother of James) while trying to salvage what he can. Massetto is on the run from Lord Bruno (Nick Offerman) for fooling around with the Lord’s wife Francesca (Lauren Weedman), and when Father Tommasso offers him a job at the convent, he takes it. Even with the stipulation that he has to pretend to be deaf and mute.

The idea is that if Massetto doesn’t talk to the girls, and supposedly can’t hear them, in theory they won’t bother him. But bother Massetto they do, and in a considerably more pleasurable manner than they bothered the previous hireling, if you catch my drift, and I think you do.

What we have here is partly an homage to a particular breed of late sixties/early seventies films that tried to dress up their naughty nuns and witchcraft sex rituals with a patina of classiness by using period settings and, oftentimes, literary source material. In this case, the script is based on one of the tales in Boccaccio’s Decameron.

Not having read The Decameron myself, I can’t say how closely the film hews to it. It definitely does a fine job capturing the cinematic sensibilities of the movies it draws from, though. And yet, unlike Anna Biller’s THE LOVE WITCH or VIVA, THE LITTLE HOURS isn’t poking fun at its inspirations. It's not as if they ever took themselves that seriously, anyway. Instead, like the films that inspired it, THE LITTLE HOURS finds most of its laughs launching pointed barbs at religious hypocrisy, the upper class, and sexism.

THE LITTLE HOURS doesn't bend over backwards to be a precise recreation of them like Biller's films or another recent throwback I'm quite fond of, THE DUKE OF BURGUNDY. Instead writer/director Jeff Baena gets the basic look and spirit right, but updates both the dialogue and the attitudes for the present day. His cast speak in more or less contemporary English, and the film avoids being overly exploitative without completely eschewing the requisite sex and nudity. And the sense of humor, as one might expect with stars like Plaza, Micucci, and Offerman, is deadpan and more than a bit off kilter.

The dramatic arc of the film works well, too. Maybe even better than the comedic aspects. The end result is a likeable, well made film that just might appeal to a broader audience than the usual arthouse habitués it's aimed at, while offering additional pleasures for those familiar with the period-set smut of yesteryear. 3 ½ out of 4 stars.
Posted by Bob Ignizio at 12:00 AM