[MAUDIE opens in Cleveland on Friday July 21st at the Cedar Lee Theatre.] 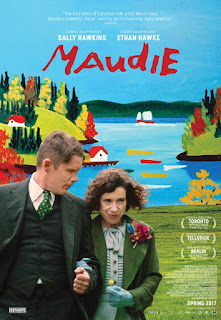 The difference between Art and Life is that Art is more bearable.

"A World Without Shadows” is the title of a stage play and short film about Maud Lewis, a celebrated Canadian folk artist who lived most of her life in a tiny, primitive house in Nova Scotia, covering every surface of the home with vibrant flowers, birds, and butterflies and painting whimsical cats in tulip fields, carriages carrying brightly dressed people, seagulls soaring over seascapes. Bent-backed and increasingly crippled by rheumatoid arthritis, the diminutive self-taught artist sold her paintings for five dollars apiece to locals and tourists who stopped by the house she shared with her husband, Everett. The couple are described in the documentary as having a “childlike, tremendous feeling; no shadows at all. Everything is happy and gay and quick and lively.”

The idea that Lewis's world was free of shadows is a myth, according to biographer Lance Woolaver, whose book, Maud Lewis: The Heart on the Door, aimed to debunk the idea that of Lewis as “a happy little elf in a bright house doing nothing but paint.” A 1965 Canadian television documentary about Lewis helped create that myth. “I paint all from memory,” says the unerringly cheerful Lewis.

“I don't copy much. Because I don't go nowhere, I just make my own designs up.” But there were plenty of shadows in her life: a family that mistreated and rejected her; a community that taunted her for her disabilities; an early unplanned pregnancy; and a domineering husband who seems to have exploited her painting talent for money.

Maud Lewis died in 1970, and is a cherished figure in Canada. Her paintings, some of which have turned up at thrift stores, have sold at auction for as much as $45,000. (In the CBC documentary, Maud smiles shyly when asked if she would take ten dollars instead of five for a painting.) She is certain to be embraced elsewhere upon the release of MAUDIE, a new biopic directed by Aisling Walsh and written by Sherry White. The film, which stars the splendid British actress Sally Hawkins, does not evade all the shadows, but still sweetens things by focusing on the unlikely love story of Maud and Everett.

We first meet Maud Dowley as a young woman living unhappily with her strict aunt Ida (Gabrielle Rose). Her brother, Charles (Zachary Bennett), has paid Aunt Ida to look after Maud. (He wears a hat and expensive overcoat, so we know he's a bad, money-obsessed guy.) Charles tells Maud, to her distress, that he's sold the family home, which he inherited when their parents died. Feeling unloved and restless, Maud spends her evenings at a local dance hall, smoking and, she tells her disapproving aunt, “hoping to make some friends.”

She decides to answer a notice placed at the general store by a local fishmonger, Everett Lewis (Ethan Hawke) seeking a housekeeper (“must have own cleaning tools”). Lewis is gruff and taciturn, and the awkward, partially disabled Maud is hardly what Everett has in mind. Yet the two eventually work out an arrangement — one that requires Maud to share, chastely at first, the house's one loft bed. (When she asks where she will sleep, he mocks her as “a princess.”)

Maud immediately starts beautifying the primitive little house, painting bright flowers and birds on every surface – walls, floors, stairs, shelves, windows – even the dustpan in Lewis' actual house was painted with butterflies. Aunt Ida is scandalized by Maud's living arrangement with Everett, an antisocial man with few friends. “I wouldn't be caught dead even driving by that house,” says auntie. Maud, strong-willed and serene, is unfazed, even pleased, by her aunt's disapproval. Hawkins brings a wonderfully impish aspect to Maud, a fun twinkle that shows she's nobody's fool.

Everett is no sweetheart: he bullies, criticizes and even slaps Maud at one point for not knowing her place. And yet, reader, she married him. Everett's resistance to the funny little woman who came to live with him and painted up his house gives way to tolerance, and then something like love.

The two are wed in a small church ceremony, and we see scenes of Everett pushing his happy wife around on a cart. They share in their dual enterprises, Maud capably keeping books for Everett's fish business, and Everett helping Maud create and sell her paintings. He cuts wooden boards for her to use as canvases and helps her peddle her hand-painted Christmas cards at local shops. (The general store proprietor says, in the familiar language of the art illiterate, “My five-year-old could do better.”)

Maud has been encouraged to make larger paintings by Sandra (Kari Matchett), a New York sophisticate who, for some reason, is buying fish from Everett and is impressed by Maud's holiday cards. The appearance of Sandra seems to promise development of the art story — we want to know more about the qualities of her work, what makes it special, and how it came to be embraced by the art world and collectors. But Walsh and White prefer to focus on Maud's bittersweet domestic life, in which painting is an expression of her sweet, creative spirit and respite from a dismal existence.

The film is quite conventional and very lovely to look at. Guy Godfree's cinematography is equally adept at the Nova Scotia landscape and the hermetic little painted house in Digby (which was preserved and is on display at the Art Gallery of Nova Scotia in Halifax.) The camera's focus on Maud's gnarled hands painting those scenes of simple beauty is quite moving. The film's success rests largely on Hawkins, whose sensitive portrayal lends nuance and humanity to a woman who has been unfairly portrayed as a cheerful gnome. Ethan Hawke is miscast as Everett, being both too young and too contemporary for the crusty late-1930s fishmonger. (It doesn't help that the script has him telling Maud he has “a lot on his plate.”) Neither of the Lewises age convincingly, even though the film covers the years up to the 1970s.

The film ups the emotional quotient by introducing a story about Maud's baby, which Aunt Ida and Charles told her died shortly after birth. Maud learns the baby's true fate from an dying, remorseful Aunt Ida, but it's not the same truth as the real story of Maud Lewis' child, whom she gave up and rejected when he tried to contact her. Real life doesn't always make the sweetest story.

The shadowy revelations of biographer Woolaver would also be out of place in a crowd-pleasing  movie. Woolever claims that Everett was a domineering miser who, once he realized he could get money from his wife's art, kept her on a strict painting schedule and isolated her from their neighbors. He died with $22,000 in cash, but the house had “no screen door, no electricity, no running water.” (An example of the movie's sweetening: Everett is shown reluctantly granting Maud's request to install a screen door.)  Woolaver claims that Maud struggled through her pain to paint two pictures a day. After the tiny house was moved to Halifax, the author unearthed from a refuse heap hundreds of tiny aspirin tins, which Maud presumably used to relieve her constant agony. She died of malnutrition and pneumonia.

The movie prettifies a rather bleak reality, but it demonstrates the persistence of human creativity, makes you think about the nature of "outsider art," and introduces to a larger audience the work of a unique artist. 3 1/4 out of 4 stars