Manifesto (July 28th and 30th at the Cleveland Cinematheque) 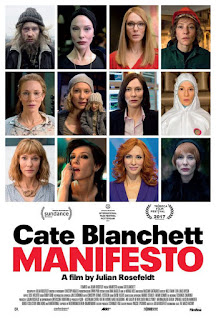 Conceived as an art installation in which 13 short films each played on their own screen, writer/director Julian Rosefeldt’s MANIFESTO has been edited by Bobby Good into a feature film that can play on just one screen. As one might guess, this is very much a conceptual art film. The concept in this case being that various artistic manifestoes (Dadaism, surrealism, Dogme 95, etc.) are given voice by actress Cate Blanchett playing a variety of characters.

Blanchett’s performances turn what could have been a dry, intellectual exercise into something human and relatable. Her characters include a scruffy beareded street person, an inebriated rocker, a woman giving a eulogy, a housewife saying grace, a factory worker, and dual TV reporters. Sometimes the characters seem like perfect compliments to the philosophies they’re espousing, other times they’re just the right juxtaposition.

I particularly enjoyed Blanchett as a school teacher grading children on how well they followed the rules of Dogme 95. It helps if you’re familiar with Lars von Trier’s (now largely abandoned) rules for filmmaking. But even if you aren’t, Blanchett’s delivery of the lines still lets the humor come through.

MANIFESTO both celebrates and mocks its subject. The film recognizes the inherent arrogance and absurdity of trying to place rules on something like art, while at the same time highlighting the ways in which constraints can be freeing and help art to progress.

Rosenfeldt has an artist’s eye, taking great care with his film’s set design, choice of locations, and of course, camera compositions. There’s no plot in the traditional sense, but tonally and thematically the film flows well. Not exactly mainstream fare, to be sure. But given its premise, MANIFESTO is surprisingly accessible and entertaining, and has a lot more laughs than one has any right to expect. You still may not like it, but it’s hard to argue that it doesn’t execute what it sets out to do perfectly. 4 out of 4 stars.
Posted by Bob Ignizio at 6:39 PM