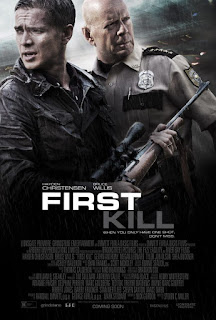 Businessman and dad Will (Hayden Christensen) takes his wife Laura (Megan Leonard) and son Danny (Ty Shelton) camping after Danny gets bullied at school. Will hopes to bond with his son and toughen the boy up a bit by taking him hunting. But instead of bagging any game, father and son wind up in the middle of an argument between a pair of bank robbers. Guns come out and one robber shoots the other, then turns his gun on Will and Danny. In self defense, Will kills the man.

It turns out the man Will killed was a police officer.

There’s barely time to process that, however. The other robber, Levi (Gethin Anthony), is still alive. Crook or not, Will considers it his responsibility to get Levi medical help. And since Laura is a nurse, he takes the robber to his cabin to get stitched up. Levi repays the good deed by taking Danny hostage.

All Levi wants is a key that was dropped during the gunfight, and he’ll let Danny go. But that’s easier said than done. The local police are already at the crime scene, and some of them may have interests that have nothing to do with law enforcement. In particular, we have to wonder which side of the law Police Chief Howell (Bruce Willis) is really on.

The setup isn’t especially original, but the script, credited to Nick Gordon, presents us with lead characters that at least have some moral complexity and depth to them. Will is presented early on as sort of a douche bag, and he seems inclined to cover up his shooting of the police officer even before he has his son’s safety as a reason. As for Levi, he may be doing some bad things, but he’s not a bad guy, even showing genuine care and concern for Danny.

Director Steven C. Miller seems more craftsman than artist, but that doesn’t mean he isn’t invested in the story he’s telling. And while this may be a low to mid budget (by Hollywood standards, anyway) movie, as far as camerawork and production values are concerned, everything is as professional and polished as most “A” list thrillers.

Christensen is well cast, with the ill will some viewers have towards his STAR WARS performances adding to our ambivalent feelings about his character. Anthony walks a similar line but with less baggage, allowing us to view his bank robber without preconceptions and genuinely wonder where his moral compass points.

Ty Shelton probably has the most fully conceived character arc, slowly and subtly gaining self confidence through his time spent with as a hostage. Bruce Willis as the film’s top cop uses his iconic screen presence to his advantage, playing both to and against expectations. Meagan Leonard and the other female cast members (Magi Avila as Levi’s girlfriend Adele and Christine Dye as Adele’s cancer-stricken mom) are sadly and predictably given little to do in this manly movie beyond serving as props and plot devices.

Eventually FIRST KILL reaches a pulpy and predictable conclusion. It’s not a completely satisfying end, but it’s satisfying enough. Which just about sums up the whole movie, a decent little crime thriller with just enough depth and thematic substance to give it some weight.

These days digital distribution has allowed a lot of smaller films like this one to get a limited theatrical release. Most of them you’d be better off waiting for Netflix, or skipping altogether. So perhaps the best thing I can say about FIRST KILL is that it’s actually worth seeing on the big screen. 3 out of 4 stars.
Posted by Bob Ignizio at 12:55 AM