Endless Poetry (July 21st and 22nd at the Cleveland Cinematheque) 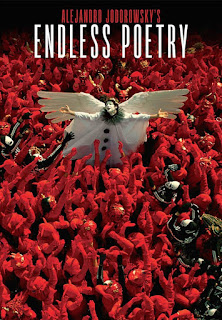 Not so much a sequel as it is part of the same film, surrealist filmmaker Alejandro Jodorowsky’s ENDLESS POETRY picks up right where his previous film, THE DANCE OF REALITY, left off. Leaving his childhood behind, ENDLESS POETRY finds Jodorowsky as a young man (Adan Jodorowsky) living in Santiago, Chile.

Although Alejandro’s father Jaime’s (Brontis Jodorowsky) attitude seemed to soften somewhat by the end of THE DANCE OF REALITY, he’s back to being a stern figure as ENDLESS POETRY begins. This is a man who hires a little person to dress up like Hitler and stand outside his store to drum up business, and he definitely has no sympathy for shoplifters. He also wants his son to become a doctor rather than follow his muse to become an artist, a profession Jaime believes is reserved for homosexuals.

But a career in medicine is not to be Alejandro’s fate, and so he sets off to make his own way in life. But first, he must find his muse in the earth mother figure of “The Viper” (Pamela Flores, who also plays the role of Jodorowsky’s mother Sara – can you say oedipal complex?). After that, Alejandro begins leading a bohemian existence of parties and art, eventually finding a kindred spirit in another young poet, Enrique Lihn (Leandro Taub). Ihe present day Alejandro, playing himself, occasionally appears to encourage his younger version.

Sure, it’s narcissistic and self-indulgent. That’s been the case with Jodorowsky’s work at least since his breakthrough feature, EL TOPO. But it has also always been the case that Jodorowskly’s finely honed vision and mastery of filmmaking artistry burns through the self-absorption to create something magical.

No, ENDLESS POETRY isn’t quite as compelling as its predecessor, even if they are inextricably linked. But at the very least, one can’t deny the visual impact of the film, overflowing as it is with Jodorowsky’s usual recurring motifs of the circus, disfigurement, fascism, and voluptuous women, and it’s thematic core of the need for the artist to stay true to his or her vision no matter how much it upsets the status quo. 3 ½ out of 4 stars.
Posted by Bob Ignizio at 9:57 AM