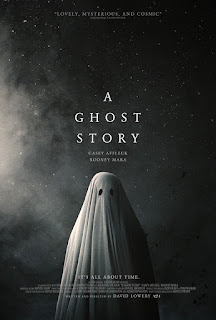 There is no mistaking A GHOST STORY for anything other than a modern indie film. One that, at times, threatens to drown in its own cutesy conceits. From the moment I saw the film’s trailer, which made clear that its “ghost” would be someone wearing a sheet with two eyeholes, I was prepared for the worst. Said trailer was also scored with falseotto-voiced modern indie rock (“I Get Overwhelmed” by Dark Rooms).

Let’s just say not my favorite kind of music, and an indication that this wasn't going to be my favorite kind of movie, either. Other grating affectations noticed early on seemed to confirm those feelings: the movie is shot in a 4:3 ratio, has very little dialogue, and goes for a dingy, subdued color palette that seems designed to call to mind a faded Polaroid from the seventies.

Just a few minutes in, and I was ready to hate this movie. But by the end, A GHOST STORY managed to win me over. It’s not going to wind up in my top ten for the year, but I liked it.

This is not a movie where the cast matters much. Our stars are, ostensibly, a bearded Casey Affleck and Rooney Mara as an unnamed couple living in a rental home that’s seen better days.  Affleck spends most of the movie under the sheet (or maybe his stand-in does, I'm not sure – seems a waste to have him under there when he doesn’t even say anything) and Mara exits the film by the end of its first third, coming back for a few scenes near the end.

The real star is writer/director David Lowery (PETE’S DRAGON, AIN’T THEM BODIES SAINTS). This is a movie that is far more concerned with intriguing themes presented in an artful style than it is with plot and character. Because of that, it occasionally falls prey to the indie excesses I was dreading. At times it recalls Terrence Malick at his most self-indulgent, but on a smaller, more personal scale, and filtered through a younger point of view. Eventually, though, I found myself just going with it.

Somehow, despite all the potentially annoying affectations, A GHOST STORY manages to be almost as profound as it thinks it is. And it has an interesting take on the whole life/death thing that feels nihilistic, but in a positive way. Of course, this is very much the kind of film that different people will take different things away from, and that’s okay. And if you still find the whole exercise pretentious and annoying, that’s understandable, too.

If nothing else, though, this is a movie we haven’t seen before. It’s thoughtful, heartfelt, and made with a sure artistic vision. 3 out of 4 stars.
Posted by Bob Ignizio at 12:00 AM