[UNCLE GLORIA: ONE HELLUVA RIDE! plays as part of the Pride Month Film Series in Cleveland at The Capitol Theatre on Tuesday, June 1th3 at 7:30 pm]
Review by Eric Sever 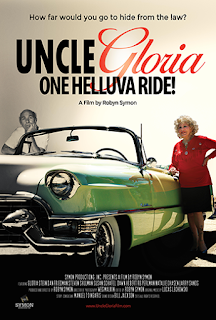 Gender identity and sexuality are not always clear cut or fixed, and UNCLE GLORIA: ONE HELLUVA RIDE delves into both topics in an intimate and irreverent documentary of one woman's stranger-than-fiction journey.

Gloria Stein, a charismatic 70-something, began life as Butch, a scrappy, loud-mouthed, homophobic bald dude with a successful auto-salvaging business.

A couple friends introduced Butch to cross-dressing on one fateful "boys" weekend, and Butch embraced a new part-time identity as Gloria. When a contentious divorce forces Butch to hide from the law, he begins living full-time as Gloria, a blonde spitfire with a taste for old-Hollywood-style glamour.

As if accidentally stumbling onto it, the middle-aged Butch realizes that Gloria is the person he was always meant to be.

The film follows her through surgeries, sex work, and family reunions, as she tries to carve out a new life.

But what does this awakening mean for the former womanizer's love life?

The film's most touching moments come from Gloria's sweet and unlikely romance with Dan, a transgender man with some mental disabilities. Aside from Gloria's own journey, the film examines their tender bond and asks: How important is gender? Does gender necessarily dictate your gender role in a relationship? What are the parameters for falling in love, and is sex a dealbreaker? And most importantly, what is true companionship and happiness?

With so many weighty issues and a subject who's life takes plenty of break-neck turns, the 76-minute movie sometimes feels like it glosses over certain areas and events too quickly. Director Robyn Symon may have better served the film by beefing it up to a full 90-minute feature length to flesh out things like, for instance, Gloria's early experiences and Dan's history.

As with any "everyman" biographical documentary, the strength of the film rests on the appeal of its subject, and Gloria's brash humor and candor are more than enough to engage. Symon smartly lets Gloria's story shine on its own, taking a no-frills approach to the storytelling and relying on a trove of old photos, home video, and interviews.

Regrettably, Symon also relies on some cheesy, poorly-shot reenactments. (You can actually see the camera's shadow in a couple of spots.) Symon is no Errol Morris, and she doesn't shoot these with enough artistry to pull the gimmick off convincingly. These lifeless, obnoxiously-lit staged moments stick out among her otherwise straight-forward style.

As a surprisingly breezy biography though, UNCLE GLORIA succeeds as an often funny, sweet, and illuminating look at the mysterious ways that love and identity can buck even our own expectations. 2 1/2 out of 4 stars
Posted by Unknown at 9:22 PM