The Exception (opens June 23rd at the Cedar Lee Theatre)


[THE EXCEPTION opens in Cleveland on Friday June 23rd exclusively at the Cedar Lee Theatre.] 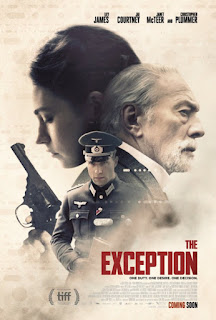 A racy bit of historical fiction, David Leveaux's THE EXCEPTION is set shortly before World War II has begun. Hitler has come to power, and Germany's former ruler, Kaiser Wilhelm (Christopher Plummer), is living in exile in the Netherlands with his wife Princess Hermine (Janet McTeer). Nonetheless, Hitler is still concerned that the Kaiser might exert his influence on the populace. To keep tabs on the Kaiser, he has former SS officer Stefan Brandt (Jai Courtney) assigned to look after the monarch.

Brandt finds himself keeping his eye not so much on the Kaiser, though, but rather on the Kaiser's pretty maid Mieke de Jong (Lily James). But beyond the fact that he isn't supposed to be engaging in hanky panky with the help, there's a pretty big complication to this budding romance: Mieke is a British spy, not to mention Jewish.

The plot hinges both on this star-crossed romance, and on the possibility that the Kaiser may have outlived his usefulness to Hitler and the Nazis.  As things come to a head, Stefan, Mieke, and the Kaiser form an unlikely alliance.

It wouldn't be entirely wrong to describe THE EXCEPTION as a German Downton Abbey, but played as more of a bodice ripper. It's a simplification, to be sure, but one that's in the ballpark. Acting and production values are first rate, if a bit stiff in that Masterpiece Theater kind of manner. But of course, Masterpiece Theater doesn't have nearly as much sex and nudity as THE EXCEPTION.

While there isn't much about the film that really stands out as special, it is well made and entertaining enough for what it is. It's sexy but classy; serious in tone, but without having all that much of substance to say. Don't expect to see this one remembered come Oscar season, but for a certain kind of viewer it's not without appeal. 2 ½ out of 4 stars.