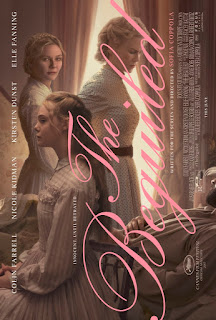 Beguiling is not quite the right word to describe THE BEGUILED, the new Civil War-set film directed by Sofia Coppola. Slender, diaphanous, insubstantial — those might be more descriptive of Coppola's adaptation of a 1966 novel by Cleveland-based novelist Thomas Cullinan, a onetime writer for Cleveland's Plain Dealer newspaper.

Originally titled A Painted Devil, Cullinan's book is a Southern Gothic about a wounded Union soldier sheltered by the headmistress and students of a Virginia girls' school, where his presence creates sexual tension and violence. The book was adapted for a 1971 movie starring Clint Eastwood, Geraldine Page and Elizabeth Hartman. Coppola's film, which stars Nicole Kidman, Kirsten Dunst, Elle Fanning, and Colin Farrell as the hapless Yankee, is the feminine rejoinder to the 1971 film, directed by Don Siegel of DIRTY HARRY fame.

It's not clear what attracted Coppola to this dark, misogynistic story of sex and revenge, but in view of her female-oriented filmography (THE VIRGIN SUICIDES, LOST IN TRANSLATION, SOMEWHERE, MARIE ANTOINETTE), perhaps she wanted to reframe it as a women's empowerment tale. (After I wrote this, I came across a gushing profile of Coppola in the Wall Street Journal magazine, in which Coppola, photographed in Valentino and Fendi clothes, says she wanted to tell the story from the women's point of view.)

Certainly the culture has changed a lot since 1971, as the hilariously overheated trailer for the Don Siegel movie illustrates. In it, the deep-voiced announcer describes Eastwood's soldier as “the prisoner of these man-deprived women! These man-eager girls!” The earlier film seems meatier, with more action, while Coppola's post-millennial take is quieter, prettier, and more contemplative. It also rather conveniently omits the presence of Lizzie, the slave.

The film opens with the discovery of the wounded Corporal John McBurney (Farrell) by the young Amy (Oona Laurence), a basket-carrying Red Riding Hood hunting for mushrooms. Panicked, Amy summons her headmistress, Martha Farnsworth (Kidman), of Miss Farnsworth's Seminary for Young Ladies. Miss Martha and her charges carry McBurney into the school, housed in an antebellum Virginia mansion. Martha tends to his leg wound, expertly mending him with the careful stitches she teaches her young ladies in sewing class. Though the soldier is a Yankee, Martha says helping him is “the Christian thing to do.” Bible study and prayer, along with sewing and French, are a major part of the school's curriculum.

Although Confederate people are expected to turn over captured Union soldiers to the army, Miss Martha declines to do so when a patrol comes around. She helps McBurney but treats him with cool disdain, reminding him haughtily, “You are a most unwelcome visitor.”

McBurney is grateful for the refuge. The girls are aroused by the presence of the handsome soldier, and sneak visits into the music room where he is lying abed. They start dressing to impress him, and McBurney, in turn, flirts with and flatters them. He fixates on a young teacher, Edwina (Dunst),who is restless to return to her home in Richmond. McBurney tells her, “I've never come across such a delicate beauty as yours.” (Casting is imperfect here, as Dunst looks more sturdy and corn-fed than delicate.)

Soon McBurney is well enough to sit and chat with Miss Martha. Platitudes are exchanged about the war (“Everyone has lost so much”), and we learn that McBurney is a mercenary who, fresh off the boat from Dublin, accepted $300 to take another man's place in the army. He helps tend the school's garden, and hopes to stay on permanently as a handyman. His hopes are dashed as the sexual rivalries at the school intensify, in no small part because of his libido. Despite having declared his love for Edwina, he is also dallying in bed with young Alicia (Fanning). Miss Martha also wants him to come to her room, an invitation he declines

Jealousies explode into violence — even Amy's pet turtle is not safe — and the coven of women conspire in an act that sets off a chain of violent events.

None of the actors is at his or her best in this buttoned-up setting. The Southern accents are wobbly, and everyone seems restrained by the corseted costumes and corseted language. At times, I longed for a hint of the nutty, reckless Kirsten Dunst of the Fargo TV show, or the funny Colin Ferrell of IN BRUGES.

Coppola's production boasts creamy, low-lit cinematography by Philippe Le Sourd, Stacey Battat's fetching costumes, and attractive production design, qualities that are always present in Coppola's movies. They do not entirely compensate for the tawdriness of the story. I have read only a sample of Cullinan's book, which was recently reprinted as a tie-in to the movie. It seems he was attempting something in the mode of Faulkner, a Southern novel with multiple narrators, adding some Ambrose Bierce eerieness and a frisson of sexual deviance (Martha's incestuous relationship with her now-deceased brother, for instance). Coppola's very linear screenplay omits the interesting element of the characters' ' inner lives. What is left is a genteel, mildly kinky shocker in Dixie drag. 2 3/4 out of 4 stars.

Posted by Pamela Zoslov at 3:46 PM