[THE BAD BATCH opens in Cleveland on Friday June 23rd exclusively at the Cedar Lee Theatre.] 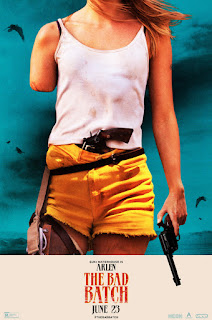 In a not too distant dystopian future, undesirables are labeled members of the "bad batch" and sentenced to a candy-colored dessert hellscape. This lawless zone is divided into two camps – the  Bridgers are cannibalistic body builders, while the residents live in a world that's flea market by day, rave by night. When they aren't partying, they somehow manage to eke out enough in the way of conventional sustenance from the limited resources around them to survive.

THE BAD BATCH opens with Arlen (Suki Waterhouse) being released into this world, where she is promptly chased down and captured by one of the Bridgers. In short order, her captor chops off an arm and part of a leg, cauterizing the wounds so Arlen won't bleed out. She is then chained up and kept alive to provide additional sustenance at a future date.

Improbably, Arlen manages to escape and make her way to the less hostile faction in Comfort. Fast forward five months. Obviously Arlen isn't thrilled about being down two limbs, but she gets by relatively well with the help of a prosthetic leg.

Over in the Bridger camp, we meet cannibal couple Miami Man (Jason Momoa) and Maria (Yolanda Ross). Sure, they eat people, but they love their young daughter Honey (Jayda Fink). And at least Maria has the decency to be disgusted by what they do to survive. It's also somewhat of a redeeming character trait (I guess) that Miami Man has the soul of an artist. An artist that eats people, but still.

A fateful encounter at a garbage dump results in Arlen killing Maria and taking Honey with her back to Comfort. When Miami Man realizes what has happened, he sets off to find his daughter. Meanwhile, Arlen has lost Honey after taking hallucinogens and wandering the desert. Keanu Reeves also turns up as the creepy, cultlike leader of Comfort, The Dream, and Jim Carrey is a mute wanderer.

Written and directed by Ana Lily Amirpour,  THE BAD BATCH is every bit as visually compelling as her debut feature A GIRL WALKS HOME ALONE AT NIGHT. Amirpour works once again with Cinematographer Lyle Vincent, who shows he's just as adept with the bold primary colors and trashy aesthetic of seventies midnight movies and exploitation fare as he was with the dreamy, poetic black and white of GIRL.

At times, THE BAD BATCH feels almost like a Greg Araki movie, minus Araki's campy sense of humor. Like any cult/midnight movie worthy of the label, it trades in transgression, symbolism, and a fair amount of pretension. If it weren't a difficult and divisive film, it wouldn't be doing its job.

Unfortunately for this reviewer, it winds up on the wrong side of that divide. The film is meandering and dragged out. That sort of leisurely approach worked well with A GIRL WALKS HOME ALONE AT NIGHT, but this feels like a film that needed a bit more pep.

Aside from the aforementioned cinematography, the art direction by Sean Brennan and set direction by Lisa Son also stand out. They give the Bridger colony a Mortville kind of vibe, while dressing Comfort like Burning Man with a giant boom box instead of a flaming effigy. And as was the case with A GIRL WALKS HOME ALONE AT NIGHT, the song choices for the soundtrack are impeccable.

But while all those elements are notable, they're strictly surface. Both narratively and thematically, the film is lacking. Amirpour seems to be grasping for profundity of some kind. But the film's symbolism, like using money as fuel for a cooking fire, or the signs that literally spell out the film's ideas, manage to feel both ham-fisted and obtuse at the same time.

The film is even less convincing when dealing with its characters on an emotional level. No spoilers, but let's just say the emotional arcs travelled by the main characters are far more implausible than the film's dystopian scenario.

One has to admire the fact that Amirpour is drawn to taking such huge risks as a filmmaker, following her vision without regard to commercial potential. It paid off for her in spades with A GIRL WALKS HOME ALONE AT NIGHT. Certain moments here and there stand out, but overall it's a slow and off-putting film. Maybe a tighter edit would have helped, maybe not. All one can say is the movie as it stands falls short. 2 out of 4 stars.