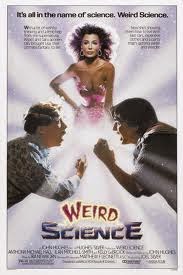 Adolescent audiences eagerly flocked to it, critics hated John Hughes' WEIRD SCIENCE when it premiered in 1984 (what was I doing? Lots and lots of college homework, you know, for that career and the good jobs that I was never going to have). The persnickety movie-scribe establishment including Hughes supporters like Roger Ebert, took the movie as an almost personal betrayal by writer-director Hughes, whose 16 CANDLES, PRETTY IN PINK and THE BREAKFAST CLUB seemed to save society from many PORKY'S-inspired lowbrow 1980s youth comedies that were all about teen sex and revenge-pranks.

To them, Hughes was a cinematic messiah and master of mass-audience Teen Comedy-Dramas With Heart and Soul. Until WEIRD SCIENCE, of course, that suddenly dove head-first into exaggerated juvie sex references and revenge-pranks, taking full advantage of the newly created PG-13 rating.

Here is what the critics forgot (but which I probably could have told them, if I weren't busy doing lots of college studies and homework, you know, for that career and the good jobs I was never going to get. Have I neglected to mention that yet?):


You see, kids, John Hughes, filmeur du cinema, started as a contributor to the raunchy National Lampoon entertainment media empire (his first feature script was NATIONAL LAMPOON'S CLASS REUNION, a genuinely terrible early slasher spoof), and a lot of WEIRD SCIENCE springs from that well - outlandish, borderline-tasteless campus-freshmen-level jokes aimed at teen patrons and tweaking The Establishment. You could always know the villains in a John Hughes movie; they're adult and have classical music playing around them. (Hughes also wrote movie scripts at a prolific pace, some over weekends, some of them, like the dumb dog comedy BEETHOVEN under pseudonyms to throw off the critics with vendettas. Point is, guy could be a bit of a hack collecting a paycheck. It was the 1980s, after all.)

In WEIRD SCIENCE, Gary (Anthony Michael Hall) and Wyatt (Ilan Mitchell-Smith, who, like Cleveland's own Charles Korsmo, left behind childhood movie stardom to teach college) are sex-starved 15-year-old schoolmates. The duo are disliked, dateless and continually bullied. With Wyatt's parents away for the weekend, Gary sleeps over at Wyatt's suburban-Illinois mansion, where the Universal Pictures FRANKENSTEIN on TV gives them an idea regarding Wyatt's new computer.

I love these typical Hollywood-in-the-early-desktop-era views of computer technology, wherein IBM software and hardware (we're talking MS/DOS 3.0, all pre-Windows here) is incomprehensible, all-powerful and magical, wizardry along the lines of Aladdin's lamp. The lonely nerds input data and pinup clips into the PC (and I'm not even sure the flatbed scanner was on the market back then) that materialize a gorgeous, eroticized woman (Kelly Le Brock) out of thin air. Their creation, named Lisa (I don't think that's an Apple plug; a bit too early for those, but someone please set me straight), exhibits magical powers and attributes rather like a genie.

But the hormonal boys prove to be epic wimps, so nervous that they can't perform sexually with Lisa; they keep their clothes on and hands stiffly to their sides while living out their lust-born goal of taking a shower with her. Lisa thus becomes more of a big-sister type to the two losers, and she takes them on a fun-filled weekend of mentoring that leaves them stronger, more assertive, and with a genuine couple of non-digital girlfriends.

The pace here is quick, most jokes are well executed in spite of the pandering, wish-fulfillment vibe, and the cast takes it over the top agreeably. When thin white geek Anthony Michael Hall
gets drunk in a largely black bar and starts talking street-jive like an old Chicago bluesman, it's politically incorrect, sure, but hilarious. Michael Berryman and Vernon Wells cameo as more or less the same degenerate villains they had just portrayed in THE HILLS HAVE EYES and THE ROAD WARRIOR, and that detail, I now recall, won over the hearts of the nihilistic, Reagan-hating leftie types who comprised my college's student film society.

Points off, though, for the lame ROCKY gag at the fadeout, which grates almost as bad as what passes for the John Hughes "emotional" climax when Gary and Wyatt prove their manhood at last - by waving a big gun at marauders. Oh well, STAND BY ME fell back on that NRA wet-dream cliche as well, as critics slobbered all over it.

Amazing fun fact: There was a fast-forgotten Weird Science cable TV series done some ten years later, with an entirely different cast, with the heroes time-traveling (shades of BILL AND TED'S EXCELLENT ADVENTURE) thanks to Lisa. I don't know what Hughes' premature death meant for his legacy in terms of lame sequels and CGI-filled remakes that nobody will want. Maybe new PRETTY IN PINKs and UNCLE BUCKs, pure business/marketing decisions, will start rolling off the assembly line regularly just like John Carpenter retreads did. Allow me to propose that the remake of WEIRD SCIENCE will finally gain a bit more respect for the original. (2 3/4 out of 4 stars)
Posted by Bob Ignizio at 12:00 AM