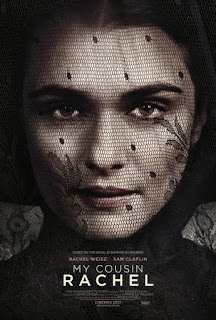 “Alive with all the impassioned suspense, dramatic fervor and excitement of the best seller by Daphne du Maurier, author of Rebecca, My Cousin Rachel comes to the screen with the only star in the world who could play it, Olivia de Havilland!” So intones the trailer for the 1952 movie, also starring Richard Burton in his Hollywood debut. “Was she woman or witch? Madonna or murderess?”

Though that movie received some good reviews and an Oscar nomination for Burton, du Maurier was unhappy with the adaptation of her 1951 novel. She particularly disliked de Havilland's looks and hairstyle, which she thought resembled the dowdy Duchess of Windsor, Wallis Simpson. Du Maurier might have found the darkly pretty Rachel Weisz, who plays Rachel in Roger Michell's new film adaptation, closer to the mark. (By the way, did you know Olivia de Havilland is still alive, and 100 years old?)

Like its popular predecessor Rebecca, MY COUSIN RACHEL is a melodrama set on a large estate in Cornwall. It's a Victorian period tale, with lots of horses, carriages, servants, dark parlors lit by beeswax candles, visits from the parson, and elevated language (though the new version throws in some curse words and a bit of mostly clothed sex as well).

Philip (Sam Claflin), a young man orphaned as a child, was taken in by his cousin, Ambrose Ashley, and raised in amiable comfort. “I loved him like a father,” says Philip in voice-over narration. Ambrose begins suffering ill health, and is sent to sunnier climates to recover, posting chatty letters to Philip. On one sojourn in Italy, Ambrose meets another cousin, the widowed Rachel, and to Philip's surprise, marries her.

Ambrose' health declines, and his letters from Italy become dark and desperate. “She watches me like a hawk,” reads one. Another contains this cryptic lament: “Rachel, my torment!” Philip makes the journey to Italy, where he is told that his guardian has died. Philip suspects that Rachel killed Ambrose, but receives a death certificate that says Ambrose died of a brain tumor, and learns that he did not change his will to include Rachel.

When Rachel comes to visit the estate, Philip greets her with suspicion, but he swiftly falls under her spell. He arranges a generous allowance for Rachel and drapes her with his late mother's expensive jewels, which he is set to inherit on his imminent 25th birthday. Convinced that Rachel will marry him, Philip rashly signs over the entire estate to her. Philip's godfather, his lawyer, and Louise (Holliday Kendall), the sensible girl who hoped to marry him, regard his besotted behavior with alarm.

But who is Rachel, really? Ambiguity is the essence of the narrative, which is strewn with suggestions that Rachel is a schemer and a poisoner, as well as signs that she's innocent. Philip is warned that Rachel is profligate with money, overdrawing her allowance and sending funds to her friend Signor Rinaldi in Italy, with whom she nuzzles and exchanges sweet nientes in Italian. (Their cozy relationship recalls the title character in Rebecca having an affair with her cousin Favell. Du Maurier seems to have had a thing for “kissing cousins”). In the novel, du Maurier toys with the reader, much as Rachel teases Philip's boyish affections, at one point likening him to a puppy with a wet nose. In contrast to dashing Richard Burton, Claflin's Philip is callow and clumsy in his passion.

The film is well-appointed and beautifully costumed, in the usual art house manner. Michell, the South African director known for attractive-looking films like NOTTING HILL and HYDE PARK ON HUDSON, builds suspense effectively, though audiences may not appreciate investing nearly two hours in an irresolute story. “Plenty of suspicion but no solution makes Rachel a dull girl,” wrote the pithy film historian Leslie Halliwell about the original movie.

Audiences are accustomed to having plot ends tied up. After the screening I attended, I heard some ladies speculating about a possible villain — the clergyman's daughter, perhaps? In the absence of a solution, they were making up their own. 3 out of 4 stars for production; 2 1/2 stars for story.
Posted by Pamela Zoslov at 9:18 PM