[I, DANIEL BLAKE opens in Cleveland on Friday June 9th exclusively at the Cedar Lee Theatre.] 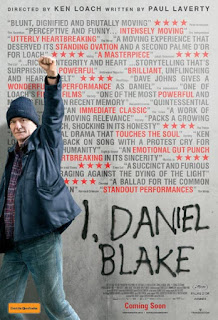 Daniel Blake, a 59-year-old carpenter in Newcastle in northeast England, has had a major heart attack, and his doctor has advised him not to return to work. “I nearly fell off the scaffolding,” he tells the Jobcentre worker performing an assessment of his “work capability.”

Daniel's nightmare descent into Kafkaesque government bureaucracy begins when an unseen official referred to as “The Decisionmaker” disagrees with his doctor and denies him support benefits. Daniel wants to appeal the decision, but is also required to look for work, processes made more difficult by his health problem and the fact that he's not computer literate.

I, DANIEL BLAKE is the latest film by the populist British director Ken Loach, whose passion for championing workers and the disadvantaged is undimmed at age 81. His dozens of films have addressed wide-ranging issues including labor rights, homelessness, alcoholism, Irish independence, the Spanish Civil War, as well as quieter dramas about ordinary working-class lives.

The film won the Cannes Palms D'Or last year, and is Loach's most financially successful film in his long, and often controversial career. A longtime member of Britain's Labour Party and a supporter of Jeremy Corbyn, the Labour candidate for prime minister, Loach has said that working people's lives are inherently dramatic.


They live life very vividly, and the stakes are very high if you don't have a lot of money to cusion your life. Also, because they're the front line of what we came to call the class war. Either through being workers without work, or through being exploited where they were working. And....if there is to be change, it will come from below. It won't come from people who have a lot to lose. It will come from people who will have everything to gain.

Daniel notices Katie, a harried single mother of two, at the Jobcentre, where she is being berated for arriving late for an appointment. Daniel comes to Katie's defense, and becomes friends with the young family. A widower still missing his wife, Daniel helps Katie and her kids by showing them how to heat their humble flat without electricity (a heater made with candles and flower pots), and carving a wooden mobile for Katie's daughter.

Katie and her children have just come from a homeless hostel in London, where they spent two years (“three of us in one room)” waiting for housing, Katie dreams of returning to school, but for now can barely feed her kids, often forgoing her own dinner so they can eat. She looks for work as a house cleaner, but ends up lured into working as an escort. Daniel tries to rescue her from that desperate choice.

Daniel's frustration grows, as he spends nearly two hours on hold with a faceless phone system that plays endless Vivaldi, and is required to attend a workshop to create a résumé to apply for jobs he can't take without risking his health. The instructor tells the job hopefuls that they must stand out, and cites the long odds against getting hired. Hearing the statistics, Daniel pipes up with a cogent critique of austerity economics:“If you can count, it's obvious there's not enough jobs!”

Older people and those of us whose parents are baffled by technology can relate to Daniel's struggle to adapt to smartphones and computers, now required to apply for benefits and jobs. “Give me a plot of land, I can build you a house,” Daniel laments. “But I haven't been anywhere near a computer.” Indeed, when an instructor tells him “Run the mouse up the screen,” he picks up the mouse and physically places it on the monitor.

The film, written by frequent Loach collaborator Paul Laverty, dramatizes the Catch-22 faced by people like Daniel and Katie, people trying to make an honest living but robbed of hope and dignity by austerity plans administered by a cold bureaucracy. At times the film seems to overplay its hand, making the unemployment officials exceptionally unsympathetic. This portrayal has prompted objections from conservative British politicians. On a BBC panel show, Business Secretary Greg Clark, sounding much like one of the bureaucrats in the film, said, “It's a difficult job administering a benefits system...Department of Work and Pensions staff have to make incredibly difficult decisions.”

The film makes a compelling case against the cruelties of late capitalism. But it is no mere socialist polemic. It is also a masterful piece of filmmaking, exquisitely photographed by Robbie Ryan in muted colors. The direction is stunning in its simplicity, directness and restraint. Influenced by the neorealist style of De Sica's BICYCLE THEIVES, Loach's films have a documentary verisimilitude (he has also directed many documentaries and docudramas). Dave Johns, a Britsh standup comedian, writer and actor, is a marvelous Daniel Blake, pugnacious, honest and authentic. Hayley Squires is exceptional as the hungry, tormented Katie.

Films about social welfare issues are less unusual in Europe and England than in the United States, where a character in Daniel's position would probably decide to rob a bank as revenge. In a climactic scene, Daniel resorts to an act of civil disobedience with a can of spray paint, and is cheered by onlookers before being led away by police. In a Hollywood film, he would become a folk hero and ultimately triumph. Loach's world is more realistic, and things go the way they would in life for people like Daniel, who carries in his pocket a simple manifesto that reads in part: “I am not a client, a customer, nor a service user. I am not a shirker, a scrounger, a beggar, nor a thief. I paid my dues, never a penny short, and proud to do so....I am a man, not a dog. As such, I demand my rights.” 4 out of 4 stars.
Posted by Pamela Zoslov at 12:00 AM