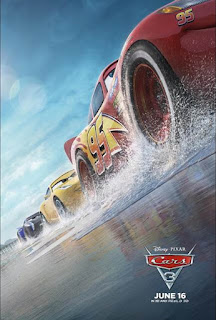 I am the father of a six-year-old boy. It should therefore come as no surprise that I have seen CARS, CARS 2, and MATER TALES, in whole or in part, several times each. It just kind of goes with the territory.

In general, critics have dismissed the CARS franchise as a mediocre piece of product from a studio, Pixar, that otherwise is the gold standard of animation. They are not wrong. Nonetheless, through repetition, the positive aspects of these films have come into sharper focus for me.

There are some funny bits, the voice cast are mostly likeable, and the always top notch Pixar animation is still top notch. I wouldn't describe any of these movies as good, but for product aimed at the kiddie market, there's plenty worse out there.

So while I wasn't dreading the latest installment in the series, CARS 3, I also didn't have my expectations set too high. And that's probably the best way to go into this if you're a parent resigned to taking your little one to see the film. You'll probably groan a few times, hopefully laugh a few times, too, and generally find yourself bored by the familiar "old athlete makes a comeback" story. Your kid(s) won't care about any of that, and will most likely think it's just great.

As I said above, this is a comeback story. Lighting McQueen (Owen Wilson), once the race car to beat in the CARS universe, now finds himself losing to newer, faster, more technically advanced vehicles. In particular, Jackson Storm (Armie Hammer), who hits speeds Lightning can only dream of.

After a particularly nasty crash on the race track, Lighting has about given up on racing. Of course he decides to get back in the saddle or we wouldn't much of a movie, and with the help of new trainer Cruz Ramirez (Cristela Alonzo) he pushes himself to the limit. But it's ultimately an older car named Smokey (Chris Cooper), the same car that coached Lightning's mentor from the first film, Doc Hudson, who teaches Lightning that he may not be able to race as fast as Jackson Storm, but he can race smarter.

Most of the characters from the original film (and their voice actors) return as well, but it's mainly Lightning and the new characters who are the focus here. That will probably sit just fine with those who are tired of Larry the Cable Guy's shtick as Mater, who has a smaller supporting role this time around after taking center stage in CARS 2.

Really, there's not much more I can say about the movie. It's as slick and commercial as the previous entries. There are more middle of the road pop and modern country songs on the soundtrack. It has a simple message that lacks the emotional depth and complexity of most Pixar movies. And of course, your kids will probably love it. I could go into full-on critic snark mode, but what would be the point? For what it is, it's okay. 2 ½ out of 4 stars.
Posted by Bob Ignizio at 12:00 AM