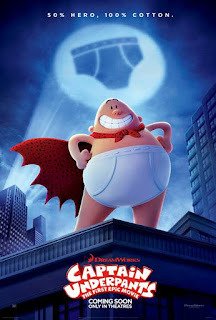 The series of books by Dav Pilkey that CAPTAIN UNDERPANTS: THE FIRST EPIC MOVIE is based on have been must-read items among the grade school set ever since the first one was published back in 1997. The question fans are no doubt pondering is, can screenwriter Nicholas Stoller and director David Soren bring the "Waistband Warrior" to the screen in a way that is suitably cinematic while still staying true to the spirit of the source material?

The answer is a resounding "yes".

Although some of the exact details have been changed, the plot of THE FIRST EPIC MOVIE starts off more or less following the first book in the series. Smart and creative fourth graders George (Kevin Hart) and Harold (Thomas Middleditch) are stifled by the drab surroundings and petty authority figures at Jerome Horwitz Elementary School. Their main nemesis is their principal, Mr. Krupp (Ed Helms).

As a coping mechanism, George and Harold make comic books starring their own original creation Captain Underpants, which they sell to other kids at the school. The Captain is an amazingly dumb superhero who wears nothing but a cape and tighty whiteys. This in and of itself annoys Mr. Krupp, but what really pushes him over the edge are the silly pranks the boys are constantly pulling, like changing around the letters on school signs.

When Krupp gets proof that George and Harold are the school's resident pranksters, he punishes the boys by putting them in different classrooms. Fortunately for the boys, George has a hypno ring which he uses to steal back the evidence Krupp has against them. Of course the boys can't resist taking things farther, and they decide to make Mr. Krupp believe he's actually Captain Underpants. What could go wrong?

As any fan of the books can tell you, plenty. For starters, while hynotized, Krupp hires a new science teacher named Professor Poopypants (Nick Kroll). But Poopypants isn't just a mean teacher: he's a budding supervillain. And when his students (somewhat understandably) can't contain their laughter at his name, he unleashes a wave of technological terror on the school. It's up to Krupp/Captain Underpants (with George and Harold by his side) to save the day.

Obviously there's going to be a whole lot of low brow bathroom humor in a movie called CAPTAIN UNDERPANTS. But there's also some smart, subversive satire about the American education system, and the way that stuffed shirt authority figures often stifle the best and brightest by trying to force them into one-size-fits-all compartments. And on a more positive note, the film celebrates friendship and creativity.

My 6 year old son proclaimed CAPTAIN UNDERPANTS, "the best movie ever." I wouldn't go that far, but it certainly is a lot of fun. If you can channel your inner potty-humor loving child, chances are you'll enjoy it, too. 3 out of 4 stars.