Can You Check Out Any Time But You Can Never Leave...Horror Hotel in Hudson? June 15 - June 18 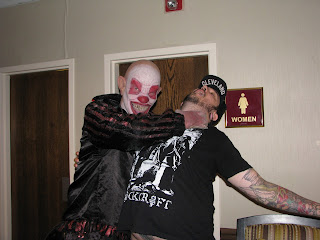 At the annual installment of the International Horror Hotel Festival & Convention, you can see a short subject called DICKEATERS: THE MOVIE. Wouldn't it be worth it alone, to say you did that?

After all, the Cavaliers lost; might as well have some takeaway for 2017.

Horror Hotel is an early-summer offshoot of The Indie Gathering, a long-running series of meetings and networking expositions and festivals put on by and for DIY Ohio filmmakers. The Indie Gathering upholds "microcinema," ultra-low budget moviemaking outside the big film-industry system.

The Indie Gathering has a big annual international film festival in Hudson, Ohio, in early fall. But from the submissions that were coming in, the organizers - stunt coordinator Ray Szuch and actress-producer Kristina Michelle, of Cleveland - noticed that backyard filmmakers around the world most often gravitated horror and science-fiction genre shorts and features.

Thus, Horror Hotel books locally made terror-fantasy cinema from all over the world (DICKEATERS, a combination of gore, comedy and campy-drag stuff, itself hailing from Philadelphia - hey, just like ROCKY). Filmmakers visit - some all the way from the Far East, and there are contests for Scream Queens and f/x makeup. Panel discussions cover stunts, legal aspects of moviemaking, and film scoring.

Networking parties and a vendor fair are designed to actually get aspiring directors, actors and crew members together to work on future projects.

Tickets range from a $50 advance VIP admission for the whole weekend, to varying one-day rates or $7 for individual feature-film screenings. And it only costs $5 for shorts. That's quite a bargain, we imagine, for DICKEATERS: THE MOVIE bragging rights.