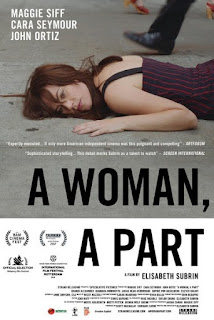 Actress Maggie Siff is probably best known for playing the part of Tara on the TV series "Sons of Anarchy". It was an often thankless role, but Siff's talent came through no matter how stupid the latest plot turns involving her character were. I'm guessing the experience helped her when it came to her starring role in A WOMAN, A PART.

In the film, Siff plays actress Anna Baskin. She has a role in a hit show, but feels that the writers aren't doing right by her character. She's also dealing with the end of a bad relationship with an addict, and apparently some addiction issues (to prescription drugs) of her own. In many ways, she's the stereotypical famous person who has everything and yet finds herself unsatisfied.

If you're in the world of art and entertainment, or just particularly interested in that milieu, you may be able to relate. If you're just the average viewer more concerned with paying your bills and getting the kids to school, though, it's a little more difficult to be sympathetic. Oh, the way your character is written isn't fulfilling for you as an actress? Boo hoo.

It may be kind of "inside baseball" (or inside Hollywood), but writer/director Elisabeth Subrin has written a film that feels grounded and true. It's also one of those movies that just sort of unfolds without much narrative structure, and feels distant and meandering at times. Siff's excellent lead performance goes a long way towards holding the viewer's attention, but that may not be enough for everyone. 3 out of 4 stars.
Posted by Bob Ignizio at 12:00 AM