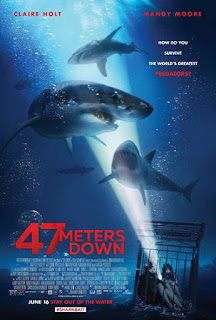 Last year THE SHALLOWS found success with modestly budgeted shark thrills, limited locations, and small cast. This year 47 METERS DOWN tries to not only replicate that success, but one-up it by doubling the number of women in peril, increasing the number of sharks, and adding in the additional danger of being trapped under water in a shark cage with limited air.

In a vacuous but thankfully short setup we meet sisters meet Lisa (Mandy Moore) and Kate (Claire Holt) vacationing at a seaside resort in Mexico. Lisa is getting over being dumped by her boyfriend, the one thing in her opinion that she had going for her over her more popular and fun sister. The reason she was dumped, she confides to Kate, is because her ex found her boring.

The sisters hook up with a couple of guys who offer to take them out to see where they can see sharks close up in a shark cage. Lisa is hesitant at first, not only because she's not that keen on being close to the sharks, but because she has zero scuba diving experience. Kate, however, wants to go, and convinces Lisa to go along because there's no way anyone who goes shark diving could be boring.

Of course things go horribly wrong. The winch used to lower the cage underwater breaks, and the women wind up trapped underwater. The next hour is a tense, claustrophobic tale of survival, enhanced by taut editing and direction, and tomandandy's grim soundtrack.

It's not a great film, and hardly one that warrants director/co-writer Johannes Roberts literally signing his work (the onscreen title is "JOHANNES ROBERTS' 47 METERS DOWN). It is, however, a serviceable thriller for the teens and twenty-something crowd it's obviously aimed at, and arguably scarier than you'd expect from the PG-13 rating. You could wait for home video, but you'd probably lose some of the intensity. I can't give it a strong recommendation, but if you're looking for a movie that'll make you jump out of your seat, it's worth plunking down your cash. 2 ½ out of 4 stars.
Posted by Bob Ignizio at 8:41 PM