The Wedding Plan (Now playing at the Cedar Lee Theatre)

[THE WEDDING PLAN is now playing in Cleveland exclusively at the Cedar Lee Theatre.] 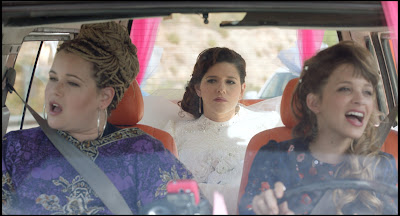 THE WEDDING PLAN offers a look inside the world of Orthodox Jewish dating, in which the matchmaking system functions to bring singles together for marriage. It also provides a peek into the heart and mind of Michal, a thirty-something Jewish woman living in Jerusalem who desperately wants to be loved and married.

Matchmaking for Michal (Noa Kooler) proved to be a little tricky; she’d been dating for 10 years without much luck. When she finally gets engaged, her fiancé, Gidi, calls it off a month before the ceremony, admitting that he really doesn’t love her. She’s distraught about it. And of course, her sister circle is there to pick up the pieces and provide her with all the love and support she needs.

Despite their support, her mother’s taunting, and a series of unsuccessful dates, Michal makes a decision that baffles everyone. When she tells the owner of the banquet hall, Shimi, that she plans to get married in 22 days, he looks utterly confused. I admit so was I. How would she get married without a groom?

Written and directed by Rama Burshtein, THE WEDDING PLAN is a romantic comedy for sure, but not in the typical sense. It’s not about the chemistry between the two lead characters. There’s nothing sexy about it like in American rom coms. The dating scenes are not romantic, and seem more like job interviews at dinner, although Michal's dalliance with the pop star had me believing she found her soul mate. I didn’t find myself laughing out loud, but rather smiling inside because the quirky antics of Michal were so endearing and amusing.

This film tells a beautiful story of one woman’s journey to find a husband and how that journey is different than one would expect. Expect to learn about the power of belief, faith, hope, and determination. If you’re into rom-com, give this movie a try. It’s funny in its own way, and it has the substance that the typical rom-com lacks. I think you’ll enjoy how Noa Kooler portrays Michal throughout the film, and especially at the end. 4 out of 4 stars.
Posted by Zoe Brown at 12:44 PM