The Wall (opens in Cleveland May 12th) 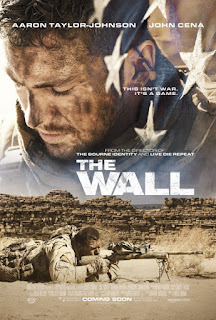 The best news about THE WALL, from Amazon Studios, is that it is not about President Trump's pet barrier against “bad hombres” from Mexico. It also has nothing whatever to do with Pink Floyd. It is instead a one-set thriller about an American army sharpshooter trapped behind a wall, threatened and taunted by an unseen Iraqi sniper.

The film's prologue and opening scenes suggest a rah-rah military "band of brothers" drama. The story, written by first-timer Dwain Worrell, is set in 2007, when, the prologue tells us, “The Iraq war is winding down, [and] President Bush has declared victory.” Mission accomplished! Two Army snipers, Sgt. Isaac (played with creditable Americanness by English actor Aaron Taylor-Johnson) and Sgt. Matthews (Jon Cena) are conducting a counter-sniper mission after some contractors have been killed while constructing a pipeline. The sergeants' parched 22-hour desert vigil is punctuated by profanity (“My balls have melted into one fuckin' ball!”) and bitter disparagement of “hajis” (the American military slur for Middle Eastern people, who have the nerve to live in a country the U.S. has invaded).

Matthews is wounded by an Iraqi sniper while collecting the dead security guards' radios. Isaac runs to his comrade's aid, and is shot in the leg. His radio is damaged and his water bottle is destroyed. It appears he will surely die, either of blood loss from his gory wound or dehydration.

Isaac takes cover behind a loosely built stone wall, a remnant of a destroyed school. He digs out the bullet, tends to his wound, and manages to communicate by radio with higher command. They promise to dispatch a Medivac helicopter and tells Isaac to shoot his rifle in the air to indicate his location.

This last bit tips off Isaac that he isn't talking to American army command — “This ain't fuckin' protocol!” — but to the sniper, known as “Juba the Ghost” (voiced by English actor Laith Nakli). The clever Iraqi has managed to get on the soldiers' radio and has lured them, and the now-dead contractors before them, into a trap. The bulk of the film is a cat-and-mouse conversation between Isaac, who is turns suspicious, desperate and resigned, and the unseen Juba, who taunts, cajoles and threatens the trapped American soldier.

Threatening to shoot the seemingly dead Matthews' face off, Juba demands that Isaac converse with him over the radio. Their rancorous badinage leads to some surprising critiques of American imperialism. Juba, a former teacher given to quoting Edgar Allen Poe, tells Isaac that he is the terrorist, telling him, “You are the one who has come to another man's country.”

An archfiend of seemingly supernatural abilities, Juba knows a lot about Isaac. For example, he knows that Isaac has returned for multiple tours of duty. He also knows there is something suspicious about the death of Isaac's fallen friend and comrade, Dean. “We are not so different, you and I,” Juba says, echoing many a movie Nazi of yesteryear. Juba's skills also include the ability to convincingly mimic, over the radio, a good-old-boy military officer from the American South. Clearly his talents are being wasted in the sniper business.

The film has, during the Juba-Isaac duel, taken a surprising turn from standard Army buddy drama to something slightly more complex. Juba emerges as educationally and even morally superior to Isaac, who not only is part of an invading army in an illegal war, but is also hiding a shameful secret. Unlike other recent U.S. military adventures, the Iraq invasion is an easy critical target, its rationale (Sadaam's weapons of mass destruction) having been widely accepted as false. Even so, the antiwar implications are noteworthy, especially in a movie where a U.S. Ranger sniper nicknamed “The Reaper” is listed as a technical advisor.

The film is reminiscent of other one-person films such as ALL IS LOST (Robert Redford fixing his sinking boat for nearly two hours) and the excellent, undersung Tom Hardy film LOCKE. If the script were not so prosaic, the story might work well as a polemical stage play. It's not exactly thrilling staring at a wounded soldier trapped behind a wall in the desert for the length of a feature film, but at least the running time is short (an hour and 35 minutes). Doug Liman, of BOURNE IDENTITY and BOURNE ULTIMATUM fame, directed. 2 3/4 out of 4 stars.
Posted by Pamela Zoslov at 12:00 AM