Suntan (May 26th and 27th at the Cleveland Cinematheque) 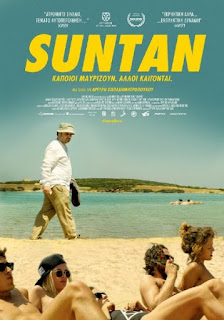 No music plays over the opening scenes of SUNTAN, but if director Argyris Papadimitropoulos had chosen to score these moments with the Wendy Carlos rendition of "Dies Irae" from Kubrick's THE SHINING, it would not have been inappropriate.

SUNTAN is something of a reverse take on THE SHINING, in which the protagonist is reimagined as the doctor for a small Greek resort island rather than the caretaker for a Colorado resort. And his problems are exacerbated not by the lonely winter spent there, but by the busy summer season.

As Kostis, the aforementioned doctor, actor Makis Papadimitriou even looks a bit like Jack Nicholson's in his role of Jack Torrance, what with his perpetual five o'clock shadow and dour visage. There's also mention of the island's previous doctor, who evidently left under a bit of a cloud, perhaps recalling Grady, Torrance's predecessor in THE SHINING.

All of which is kind of odd for a movie that also seems to be channeling the 1979 Blake Edwards "middle aged guy chases after attractive young woman" farce 10 (even going so far as to utilize a rock version of that film's memorable musical cue ”Bolero" on multiple occasions). But this is kind of an odd movie.

Kostis has little work during the winter as the island's population is only 800 during the off season. But once the sun returns and the beaches open, things get hectic. There are plenty of young, beautiful people looking for fun, and it's not rare for them to injure themselves in that pursuit.

One of Kostis' first tourist patients is a 19 year old blond named Anna (Elli Triggou). The young woman seems to be flirting with Kostis, and the older man is instantly smitten. But getting Anna all to himself won't be easy, as she is constantly in the company of her party loving friends, including her boyfriend.

Like most people on the island, Anna and her friends don't overly concern themselves with wearing swimsuits when they're at the beach. Kostis is clearly less comfortable with his middle aged body. Nonetheless, when he provides Anna and her friends with booze and entry to some of the island's more happening parties, the young people sort of adopt him as their mascot. Anna even seems willing to have sex with Kostis, which he interprets as something more meaningful.

This eventually leads to a tonal shift in the film, as Kostis' infatuation turns into more of an unhealthy obsession. Where it all ends up is a bit of a surprise, but makes sense given what has come before. The end result is something of a rebuttal to all those good natured sex romps like 10 and BLAME IT ON RIO that were everywhere in the eighties.

As mentioned earlier, it's kind of an odd movie. But also a good one. The balance between sun and fun and the film's darker elements is handled extremely well. The youthful party people roles don't require a great deal of acting nuance, but Triggou does a good job humanizing what could have been a generic sex goddess role. But it's Papadimitriou who really does the heavy dramatic lifting as Kostis, morphing from sad sack to a guy with a new lease on life (and his sex life) to something darker. 3 ½ out of 4 stars.
Posted by Bob Ignizio at 12:00 AM