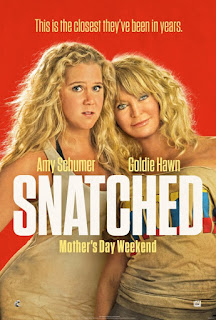 Sorry to ruin anybody's mother's day plans, but if you care about your mom at all, do not take her to see SNATCHED. Even with modest expectations and an open mind, this alleged comedy can't clear even the extremely low bar set by this reviewer.

Comedian Amy Schumer plays Emily Middleton, a narcissistic woman who gets dumped by her rock star boyfriend just days before they are supposed to go on a (non-refundable) vacation in Ecuador. None of Emily's friends are willing or able to come with her, so as a last resort she takes her homebody, "crazy cat lady" mom Linda.

The resort is great, and Emily meets a ruggedly handsome guy named James (Tom Bateman) who seemingly takes a shine to her. In reality, though, James is scouting victims for a kidnapping ring, and Emily and her mom are to be the latest abductees. As the two women attempt to escape and make their way to the United States embassy, they leave a trail of bad guy bodies in their wake. Wanda Sykes and Joan Cusack show up to waste their talents in weird supporting roles, too. Hilarity ensues?

It's clear that SNATCHED wants to hop on the "women can be gross and funny, too" bandwagon started by BRIDESMAIDS in 2011, which is seemingly coming to a head this summer (in addition to SNATCHED, we have ROUGH NIGHT and GIRLS TRIP coming soon). But this ain't no BRIDESMAIDS. That movie unabashedly went for the gross-outs, sure, but it was also smart, funny, and heartfelt. SNATCHED can handle the gross part, but fails on every other level.

Schumer has been funny, sometimes extremely so, on her show. Her standup can be uneven, but more jokes hit than miss. And in her first film as star, the uneven and too long TRAINWRECK, she nonetheless proved a winning screen presence.

But a big part of the reason TRAINWRECK worked is that it played to Schumer's strengths. Probably because Schumer wrote the screenplay to that one herself. Kate Dippold (the GHOSTBUSTERS remake, THE HEAT) does the honors here, and her writing is painfully generic. Anyone could have played Schumer's role. You could have gender swapped it and made this a Jack Black vehicle with little discernible difference.

Jonathan Levine's direction is just as bland. He's completely out of his depth trying to juggle lightweight comedy with the film's often surprisingly dark action elements.