Slack Bay (May 27th and 28th at the Cleveland Cinematheque) 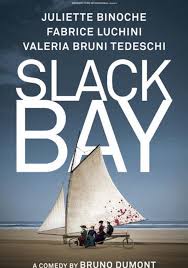 Class warfare and cannibalism collide in the deadpan black comedy SLACK BAY. The setup is that tourists are disappearing from the small French village of Ma Loutte. The local constabulary, the Laurel and Hardy-esque pair of Inspector Machin (Didier Després) and Malfoy (Cyril Rigaux) are at a loss.

The audience, however, is very much aware of what is happening and who is responsible. Call this a SPOILER ALERT if you will, but the movie shows us early on that the Brufort family – headed by patriarch L'Eternel (Thierry Lavieville) – are murdering and eating hapless vacationers. Mom (Caroline Carbonnier) doesn't even bother cooking the meat, serving up bloody red plates of tasty foot for her ravenous progeny.

When they aren't killing the tourists, the Bruforts have a business transporting them to a nearby island. Sometimes the water is shallow enough that L'Eternel and his number one son Ma Loutte (yes, same name as the village, played by Brandon Lavieville) can simply carry their customers across. Other times they have to make use of a small boat.

We also meet an upper-class family who own a striking summer castle in the town, the Van Peteghems – most notably hunchbacked patriarch Andre (Fabrice Luchini), the histrionic Isabelle (Juliet Binoche), the gender fluid Billie (Raph), and the family's maid Nadège (Laura Dupré), who is aware of what the Bruforts are up to.

It would be easy to write this off as a film in which the downtrodden poor get their just revenge on the upper class by literally eating the rich, but SLACK BAY isn't quite that simple. Writer/director Bruno Dumont depicts almost everyone as stupid and venal. The exception is Billie and Ma Loutte, who try to escape their seemingly preordained fates via a romance that is most likely doomed.

Dumont carves out his own unique, twisted vision here, but the territory he explores does at times recall the works of David Lynch, Luis Bunuel, and Monty Python – perhaps a little bit of the Coen Brothers and early Peter Jackson, too – without necessarily being influenced by any of them. You'll laugh (well, chuckle lightly is more like it), you'll be grossed out, and at times you'll be confused. You definitely won't be bored, though. 3 ½ out of 4 stars.
Posted by Bob Ignizio at 12:14 AM