Road to the Well (now available on home video and VOD) 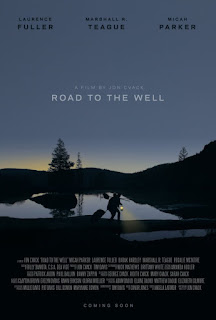 A midlife crisis is set in motion when Frank (Laurence Fuller) catches his girlfriend having sex with his boss. Enter Frank's old friend and all around shady character Jack (Micah Parker). The two hit the bar to commiserate, and while there Frank hooks up with an attractive woman named Ruby (Rosalie McIntire). The two head outside to Frank's car to have sex, but things take an unexpected turn to violence when an unknown man attacks and kills Ruby with a knife and leaves Frank unconscious with the murder weapon and the corpse.

Jack takes this more or less in stride, leading us to believe this isn't the first time he's had to deal with a dead body. And while discussing the options with Frank, Jack also reveals that Ruby was a hooker he hired to help lift his friend's spirits. Eventually, despite some half-hearted objections from Frank, the two friends decide to cut up the body and bury it.

And so we set off with Frank and Jack on a dead hooker disposal road trip. The plan is to bury the body in the woods near a cabin owned by another old friend. Seems like a simple plan. But of course, there are complications.

Written and directed by John Cvack, ROAD TO THE WELL is a nicely shot and well-acted film. If you're in the mood for a low budget indie crime story, you could certainly do worse. You could also do better, but you could definitely do worse.

So what are the problems? For starters, it's hard to ignore the film's underlying misogyny. Not just the casual way that Ruby, the dead prostitute, is dismissed (an all-too common cinematic trope). But the film's general attitude towards women is negative. When it bothers to depict female characters at all, that is. To be fair, one could raise the same issues with any number of films, but it feels pronounced here.

More generally, though, the set-up feels generic and the main characters are bland and unlikable. Both Fuller and Parker are fine actors and turn in solid, if not especially noteworthy, performances. It's just that these are generic crime movie types we've seen countless times, and there's little in the way of flavor to make them stand out.

Here's the shame of it. After a slow and predictable first hour, WELL takes an interesting turn with the introduction of a character named Dale (Marshall R. Teague). He seems like your usual nosy neighbor type that often pops up in movies like this, but there's a twist. But once Dale exits the film, we're back with our two protagonists. And it takes far more effort to care about what happens to them than this viewer could muster. 2 out of 4 stars.
Posted by Bob Ignizio at 12:00 AM